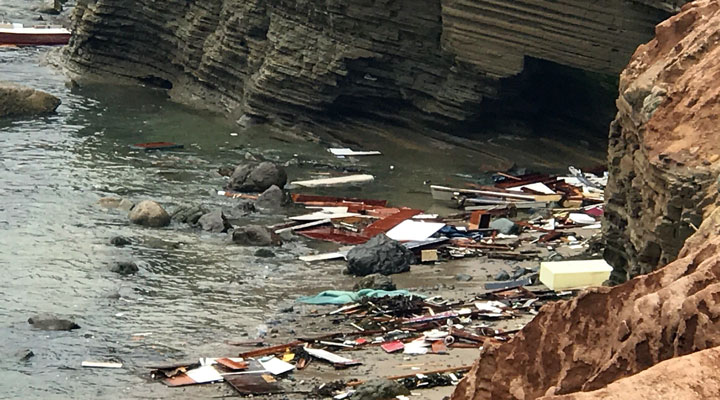 SAN DIEGO – An attempt to smuggle more than 30 people into the United States along the coast of San Diego Sunday turned deadly after the smuggling boat broke apart along a reef at Point Loma.

According to the San Diego Fire-Rescue Department, the incident began at about 10 a.m. Lifeguards received the initial notification of the vessel in question experiencing trouble via VHF radio from a tow vessel that was in the area. The reporting party indicated that one person was on board and that the boat was near the tidepools at Cabrillo National Monument, on Point Loma in San Diego.

The incident commander, SDFD Lifeguard Lt. Rick Romero, responded and also sent a rescue boat.  Lt. Romero observed a 40-foot cabin cruiser close to the rocks. A few minutes later, as additional lifeguards responded to the area, the cabin cruiser had broken apart against the rocks inside the surf line.

U.S. Customs and Border Protection Air and Marine Operations, the Office of Field Operations, the U.S. Border Patrol, and other federal, state, and local officials responded to the scene.  CBP officers, Air and Marine agents, and U.S. Border Patrol agents accompanied the individuals as they were transported to local area hospitals.  Air and Marine Operations deployed an A-Star helicopter as well as a 41-foot coastal interceptor vessel in support of search and rescue operations.  The crew aboard the interceptor vessel were able to help transport two individuals rescued from the water from the ship they were on and bring them to emergency medical services responders waiting onshore.

According to the San Diego County Medical Examiner’s Office, three people from the smuggling boat died.  29 survivors were taken to various area hospitals; five of the 29 remain in the hospital on Monday.

Preliminary checks by U.S. Border Patrol agents indicate that all except two of the boat people were Mexican nationals with no legal status to enter the U.S.  One of the two non-Mexican individuals was from Guatemala, with no legal status in the U.S.  The final person was identified as the captain of the boat.  The man, a U.S. citizen, was turned over to U.S. Immigration and Customs Enforcement, Homeland Security Investigations (HSI).  An investigation is ongoing.

Of the 28 undocumented non-citizens taken into U.S. Border Patrol custody for processing, one was identified as an unaccompanied 15-year-old boy.  The others were ages 18-39, 21 men and 6 women.

Maritime smuggling on the Southern California coastline has been on the rise.  On Thursday, CBP Air and Marine Operations stopped a boat 11 miles off the coast of Point Loma with 21 people on board, attempting to illegally enter the U.S.   On Friday, officials announced an increased presence over the weekend, urging people to consider the dangers of attempting to illegally enter the U.S. by sea.

Later on Sunday, at about 5:30 p.m., U.S. Customs and Border Protection Air and Marine agents took into custody nine Mexican nationals attempting to enter the U.S. illegally.  The group, including seven men, one woman, and one unaccompanied 13-year-old boy, were dropped off by a pleasure craft at the Newport Dunes Boat Ramp in Newport Beach.  All nine were turned over to U.S. Border Patrol agents for processing.  The incident is currently under investigation by the ICE HSI Los Angeles Border Enforcement Security Task Force (BEST).