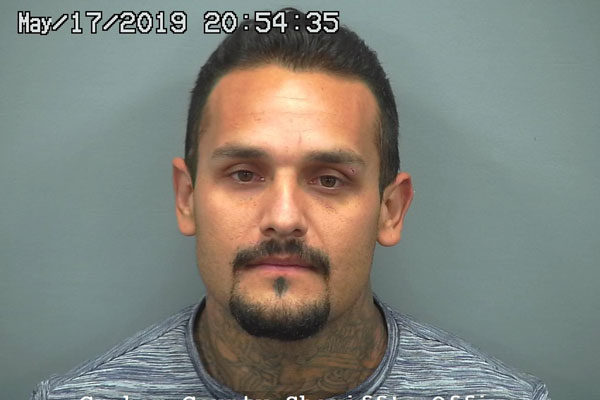 Contributed Photo/Courtesy GCSO: Richie Pablo Garcia was apprehended after being spotted at Walmart. Garcia was wanted for the beating of two men in two separate incidents May 5.

SAFFORD – Back in 2010 when Richie Pablo Garcia broke out of the Graham County Jail, he only made it a day before he was recaptured. This time, Garcia, 29, lasted 12 days on the lam before being taken into custody.

Police had been on the lookout for Garcia since May 5, when he was allegedly involved in two separate altercations that sent two men to hospitals with broken bones. (Gila Herald: Police issue ATL for man regarding two separate aggravated assaults – May 11, 2019)

On May 17, Garcia was seen shopping at Walmart by a person who then notified the police. Officers located a green truck Garcia was said to have been driving in the parking lot and waited for the suspect to return.

Officers watched as Garcia and his girlfriend (now fiancé according to a marriage license filed after his incarceration) and a toddler. The officers then initiated a traffic stop shortly after Garcia turned onto 8th Street and took him into custody. Since Garcia’s girlfriend’s driver’s license was suspended, officers helped her contact her mother to arrange for someone to retrieve the truck.

Garcia was then booked into the Graham County Adult Detention Facility on two counts of aggravated assault and a charge of disorderly conduct with a dangerous instrument for allegedly striking one of the victim’s with a flashlight.

According to previous police reports, Garcia was accused of beating his own father – breaking his jaw and finger – after his father advised him that he was driving a work truck recklessly around the neighborhood. The victim was later flown to a Tucson hospital for treatment.

The same truck was then seen at an incident at the Court Street Apartments the same evening in which Garcia allegedly drove into the area at a high rate of speed endangering nearby children. When a man took umbrage at the reckless driving, Garcia allegedly initiated a physical confrontation and choked and kicked the man before hitting him in his head with a  flashlight. That victim suffered a broken cheekbone and broken rib and was treated at Mt. Graham Regional Medical Center.

Garcia was previously sentenced to 4.5 years in prison by then Graham County Superior Court Judge R. Douglas Holt in July 2010 and was released off probation in January.