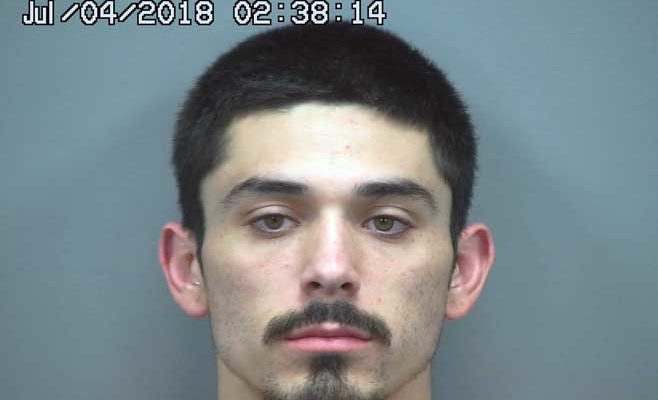 Contributed Photo/Courtesy GCSO: Angel Montano was caught with heroin after attempting to flee from an officer by running into Circle K.

SAFFORD – An attempt to avoid apprehension did not fare well for a Safford man who was quickly caught as he apparently tried to escape into the bathroom of a Circle K.

According to a Safford Police report, an officer was on patrol near the intersection of Relation Street and 1st Avenue at about 12:12 a.m., Wednesday, July 4, when he noticed Angel Montano, 23, driving a gold, four-door sedan. The officer was aware Montano’s driver’s license was suspended and that he has fled from officers numerous times in the past.

As the officer turned his vehicle around to stop Montano, the sedan quickly entered the parking lot of the Circle K at 1323 S. 1st Avenue and Montano leaped from the car and ran inside the store.

The officer pursued and caught Montano just before he could make it to the bathroom. A subsequent search of Montano yielded a “personal” amount of heroin in his pant’s pocket.

A further search of Montano’s vehicle yielded another small quantity of heroin, a glass pipe with methamphetamine residue, a digital scale with heroin residue, and other bits of drug paraphernalia inside a backpack. Montano denied the heroin in his pocket and the items in the backpack were his. Later, as he was being booked into the jail, Montano allegedly said, “What’s on me is on me” but again denied possessing the items in the backpack.

When asked why he fled from the officer Montano allegedly said, “I guess every time I see you guys I just run. It’s just what I do.”

Montano was booked into the Graham County Adult Detention Facility on charges of possession of a narcotic drug, possession of drug paraphernalia, and driving on a suspended license.