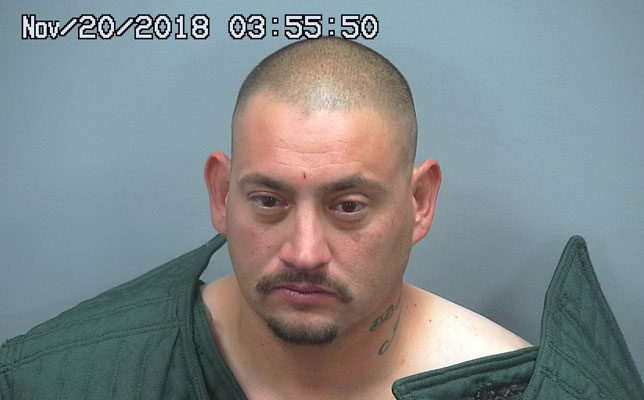 Contributed Photo/Courtesy GCSO: Jason Benavidez was jailed after allegedly threatening his estranged wife while driving drunk past a house she was staying with their children.

SAFFORD – A man who left text and voice messages on his wife’s cell phone threatening to kill her and himself and was arrested for DUI in the early morning hours of Tuesday, Nov. 20. The suspect, Jason Benavidez, 36, was subsequently booked into the Graham County Adult Detention Facility on charges of threatening or intimidating and disorderly conduct.

Officers were initially dispatched at about 12:21 a.m. to the victim’s residence after she reported her estranged husband driving by the house where she and their two children were staying.

The victim said she had left Benavidez and that he made threats to her prior to driving by the house at about 12:04 a.m. The threats included a lot of profanity and alluded to either having his children see him dead or that he would cause her bodily harm. Another text message sent to his daughter said she would walk outside of the house and see him dead, according to the police report.

In his voicemails, an officer heard Benavidez threaten his wife by saying, “You want to (expletive deleted) with me? You (expletive deleted) up,” and “the cops are gonna have a party tonight cause I’m coming for you.” (sic) Yet another text message read, “It 12:00 time to die.”(sic) The victim reported he then drove by the house after sending the last text message.

Another officer was searching for Benavidez as the first officer was receiving the information from the victim and spotted his red work truck. The officer followed Benavidez as he drove past where the victim was staying yet again and waited until he was a safe distance away before initiating a traffic stop.

Upon contact with Benavidez, the officer asked him what he was doing, and Benavidez allegedly said he was looking for his children. The officer noted Benavidez had bloodshot eyes and smelled of alcohol.

Benavidez initially denied having a cell phone and said he couldn’t have sent the text and voice messages, but his cell phone was found in the truck.

Benavidez was given a field sobriety test, which he failed, and a portable breath test listed his breath/alcohol concentration at .167. He was then arrested for DUI and a warrant was granted to compel him to submit to a blood draw for testing purposes.

After the blood draw, Benavidez was booked into the jail on charges of threatening or intimidating and disorderly conduct, with a possible DUI charge pending the results of the lab test.