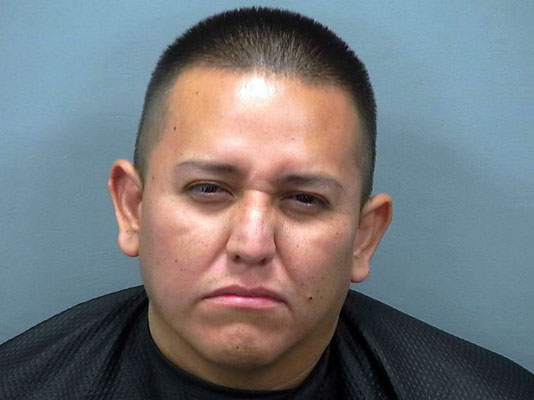 Contributed Photo/Courtesy GCSO: Bernardo Mull, 32, was booked into jail on a five-year-old warrant after he was found with a stolen American Flag on July 4.

SAFFORD – The Gila Valley celebrated Independence Day in style, however, one inebriated person who had been wanted for more than five years decided they would like a souvenir from the city of Safford’s decorations and ended up in jail for it.

Bernardo Dean Mull, 32, of Bylas, had an active warrant for his arrest since February 2016 after failing to appear in court to answer to a charge of driving on a suspended license.

In the early morning hours of July 4, Mull was spotted by a Safford officer as Mull staggered down a sidewalk on 6th Avenue in Downtown Safford while carrying an American Flag that had been posted on the utility poles in honor of Independence Day.

As the officer was securing the flag, Mull briskly walked away and went inside Shane’s Place bar at 609 S. 6th Ave. The officer had yet to identify Mull at that time, and entered the bar looking for him.

Once inside, patrons directed the officer to the patio area, where Mull was found sitting in a dark corner by himself. Mull then identified himself to the officer, and County Dispatch advised of the active warrant.

The officer took Mull into custody and gave his cellphone and wallet to a friend of Mull’s at the bar at his request. Mull was then booked into the Graham County Adult Detention Facility on his warrant and was later adjudicated in Safford Municipal Court, where he plead guilty on July 6 to driving on a suspended license and failing to appear in court.