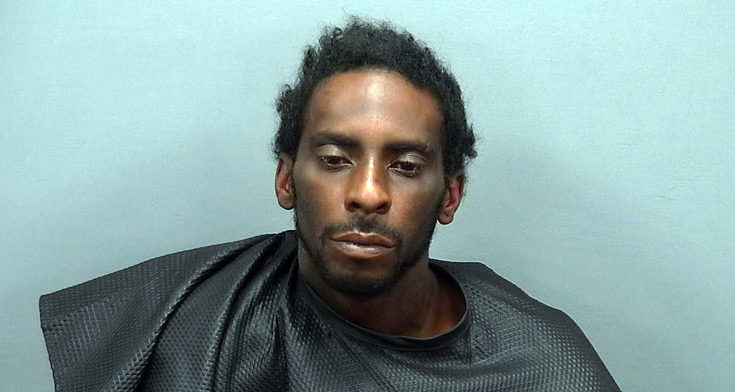 Contributed Photo/Courtesy GCSO: Robert Smallwood Jr., 37, was booked into the jail on charges of misconduct involving weapons, disorderly conduct with a deadly weapon, and possession of drug paraphernalia.

Suspect had been involved in numerous domestic calls

SAFFORD – A man who had been involved in four calls of service from the police regarding a domestic situation over the weekend was arrested after allegedly pointing a gun to his head while his 1-year-old child was next to him.

Robert Smallwood Jr., 37, was booked into the Graham County Adult Detention Facility on Sunday, May 3, on charges of misconduct involving weapons, disorderly conduct with a weapon, and possession of drug paraphernalia.

Police were originally dispatched to Smallwood’s apartment at 816 W. Court Street on Saturday morning at about 4 a.m. regarding a domestic incident between himself and his girlfriend. At that time, Smallwood agreed to leave and take his child from another relationship with him to stay elsewhere. The girlfriend remained in the apartment with her two older children from another relationship and two younger children she shares with Smallwood.

Throughout Saturday, however, Smallwood reportedly kept coming back to the apartment and causing a disturbance as he gathered more belongings, resulting in three calls for service that day.

On Sunday night, officers were again called to the apartment at about 11:28 p.m. after Smallwood allegedly brandished a loaded handgun with a chambered round and pointed it at himself while holding the couple’s 1-year-old child.

The girlfriend left the residence and told a friend what was occurring. The friend then called the police and advised Smallwood had his girlfriend and children at gunpoint.

Officers responded to the scene and located Smallwood outside of the residence. When asked to show his hands, the gun reportedly fell onto the ground.

Smallwood refused officers’ commands initially and began to yell and cause a scene that attracted other residents. Multiple officers arrived to quell the situation, according to reports, as one officer stayed where the gun had fallen as others took Smallwood into custody. The gun was then photographed and cleared of its ammunition.

The girlfriend advised since Smallwood had kept coming back she let him back in and left for a friend’s house herself the previous night. On Sunday, she came back and Smallwood wasn’t there until later that night when he returned and acted as nothing had happened previously.

Due to past felony convictions, Smallwood is a prohibited possessor and is not allowed to have a firearm. While being detained, a glass pipe was located in his possession, along with a cut straw commonly used to ingest illicit drugs.

Smallwood was transported to the Mt. Graham Regional Medical Center due to his actions, where he denied having the gun, even after an officer told him he heard him drop it. He also denied wanting to harm himself. After being medically cleared, he was taken to jail and booked on his charges.