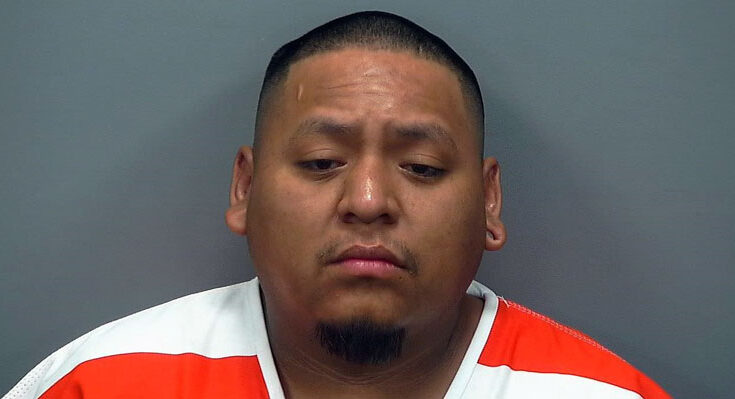 Contributed Photo/Courtesy GCSO: Jacob Cassadore, 27, of Whiteriver, Arizona, has been charged with aggravated assault on a minor, assault, and custodial interference.

SAFFORD – A mother and daughter received a fright earlier this month when a man they did not know reportedly attempted to pull the girl from her mother’s vehicle.

Jacob Cassadore, 27, of Whiteriver, Arizona, was arrested and booked into the Graham County Jail. On April 25, the Graham County Attorney’s Office charged Cassadore with aggravated assault on a minor, assault, and custodial interference.

According to a Safford Police report, the mother said she was driving to Ace Hardware the afternoon of April 9 when she accidentally missed her turn and instead turned onto 5th Avenue.

While sitting at a red light at the intersection with Main Street, the woman said she made eye contact with a male who was crouched down near a vehicle parked on the east side of 5th Avenue. She said she told her 13-year-old daughter to lock the door, but the man – later identified as Cassadore – had already run to the vehicle and began attempting to open it.

The girl was unable to keep the door closed, and Cassadore grabbed her right arm and tried to pull her from the vehicle, according to the victims’ statements to police. The girl’s seatbelt prevented the attacker from his goal, however, and the mother accelerated away from the area and called the police.

An officer met up with the victims who were visibly shaken from the encounter. While describing the ordeal to the officer, the girl began to scream as she spied Cassadore.

However, two citizens had already rounded up Cassadore – who was obviously intoxicated – and were escorting him to police custody. Cassadore later showed a BAC of .380 and had to be medically cleared before being booked into jail.

Cassadore was also the subject of two other police calls near the same time period. In one, an employee at the GCRC Thrift Store on Main Street said Cassadore was acting aggressively in the store and pushed the employee. The employee said he hit Cassadore with a mop, breaking the mop, and then chased him out while wielding a golf club.

Another nearby business owner said Cassadore was in his shop getting a haircut and was acting weird. He said when Cassadore left, he was harassing some children and appeared to try and get into a truck.

Cassadore insisted he did nothing wrong and cursed the officers with racial comments. After being cleared by staff at the Mt. Graham Regional Medical Center, Cassadore was booked into jail without further incident.