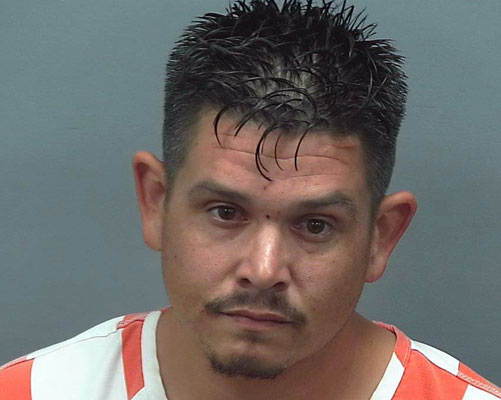 Contributed Photo/Courtesy GCSO: David Anthony Montoya, 34, was arrested and booked into the Graham County Adult Detention Facility on two counts of theft of means of transportation and one count of theft of a credit card.

SAFFORD – David Anthony Montoya, 34, was arrested and booked into the Graham County Jail on May 21 regarding two counts of theft of means of transportation, and theft of a credit card. A warrant for his arrest had been issued just four days prior regarding a petition to revoke his probation that stemmed from a theft conviction out of Greenlee County.

Authorities tracked Montoya to a vacant residence on the southeast corner of Valley Avenue and E. 7th Street in the early morning hours of May 21 and took him into custody at gunpoint.

According to Safford Police reports, officers were first dispatched at 2:32 a.m. to a residence on 6th Avenue regarding a prowler who had left a blue Chevrolet Cruze parked in the resident’s driveway with its headlights illuminated and doors open. The vehicle was registered to a person in Morenci, however, the registered owner wasn’t able to be contacted and it was towed from the scene.

Prior to towing the vehicle, officers located a letter from the Arizona Department of Corrections, Rehabilitation & Reentry that was addressed to Montoya.

While officers were completing the tow of the Chevy, they received a call at about 3:12 a.m. regarding a silver Buick sedan being stolen from the Safford Inn at 520 E. U.S. Highway 70. Just before that call, Graham County Dispatch reported receiving a call from a man identifying himself as David Montoya who said a prowler was inside his residence. Montoya allegedly gave the address to Home Depot, but the call originated from an area near the Comfort Inn on Entertainment Avenue. The victim advised that she saw her vehicle being stolen and tried to block the man and was nearly struck as he fled in her car.

Officers were then dispatched at 3:35 a.m. to a residence on Main Street regarding another prowler call. The resident in that incident advised someone was banging on his back door. Upon arrival, officers located a blue, Chevrolet S-10 pickup truck parked outside the residence that was found to be stolen as well.

Utilizing witness accounts and tracking footprints, officers from Safford and Thatcher made their way to the vacant residence and noticed a window in a structure on the property that appeared to be freshly broken. Officers entered the building at gunpoint and located Montoya.

During interrogation, Montoya allegedly admitted to stealing the Buick and Chevy pickup truck, and a debit card and EBT card from the owner of the Buick were found on Montoya. The Buick was later found in the south parking lot of the Quality Inn and returned to the victim and her stolen cards.