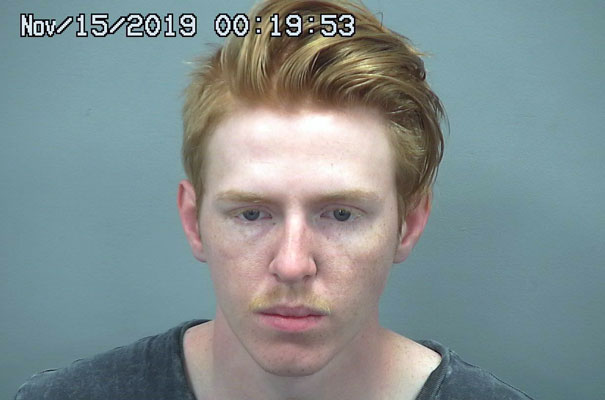 Contributed Photo/Courtesy GCSO: Simeon Hall was booked into the jail on charges of assault, disorderly conduct, and misconduct involving weapons.

SAFFORD – A child exchange between two teenage estranged lovers went awry Thursday, Nov. 14, when the father reportedly became impatient and didn’t want to wait for the mother to change the 2-month-old infant’s diaper.

According to a Safford Police report, the 17-year-old mother recently moved out of an apartment in Thatcher she shared with Hall and into a relative’s house in Safford. She told officers that Hall came to the house to take the baby and she advised she wanted to change her diaper first. She said as she went to change the baby, Hall grabbed her by the hair and nearly pulled her to the ground while she was holding the infant. The mother then screamed and her 15-year-old sister came to her aid and struck Hall. The sister then attempted to block the doorway while the 17-year-old called the police, but Hall threw her out of the way and retrieved a handgun from his vehicle, according to the sisters’ statements to police. They said Hall then inserted a magazine into the handgun, racked the slide and pointed the handgun into the air and asked, “what’s up now?” They said Hall then banged on the residence’s door for a short while before going back to the vehicle.

During interrogation, Hall allegedly said he pushed the 17-year-old in the back when she went to change the baby’s diaper to get her to hurry because he wanted to leave and that he “got a little more rough with her than usual.”

The officer inquired about what he meant by being more rough than normal, and Hall said he was just pushing her telling her to get a move on it and that he just pushed the sister out of the way so he could leave. He denied retrieving his gun out of the car.

A Taurus 9-mm handgun was located in Hall’s vehicle and was secured by the police. Another Safford officer advised that Hall had made a Facebook post during the summer holding a handgun while stating “this is for you.” The officer reported he believed the post was directed toward him due to his involvement in a case involving the 17-year-old, who was still enrolled at a local school.

The officer also noted that Hall had been arrested on a prior domestic violence case that also involved the same victim last year.

Hall was then transported to the jail and booked on the above-listed charges. On Monday, Nov. 18, official charges were filed against him for assault, disorderly conduct, and carrying a deadly weapon while under the age of 21. He posted a $1,000 bond and was released from custody pending adjudication, according to online court records.