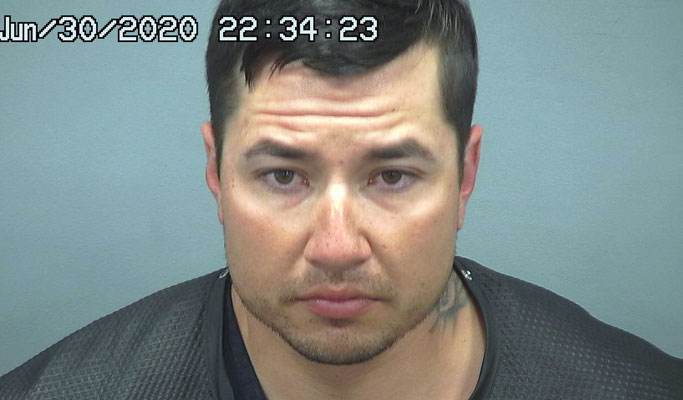 Contributed Photo/Courtesy GCSO: Rickey Chacon, 30, was sentenced to two years in prison for violating the terms of his probation.

SAFFORD – Rickey Louie Chacon, 30, of Safford, was sentenced Tuesday to two years in prison by Graham County Superior Court Judge Michael D. Peterson for violating the terms of his probation.

Chacon was on probation since 2015 on separate charges of facilitation to commit burglary in the second degree – a Class-6 felony – and aggravated assault/domestic violence – a Class-4 Felony. He has had several petitions to revoke his probation since then for a variety of reasons.

In addition to the prison sentence, Chacon is also still being adjudicated for a separate DUI charge this year from Willcox Justice Court.

On Tuesday, Chacon appeared in front of Judge Peterson and admitted to leaving a rehabilitation center in Sierra Vista before being released and then failing to report to his probation officer. He then tested positive for methamphetamine on May 18.

During sentencing, Chacon spoke on his own behalf and owned up to his fault.

“I understand there are consequences for what I did,” Chacon said. “I dishonored my side of the contract what I signed up for . . . I just appreciate my loved ones and the support that I do have and I apologize for letting them down.”

After serving his two-year stint, Chacon will be placed on Intensive Probation and will have an additional 60 days added to his probation term.

Chacon will early one day early release for every seven served and Judge Peterson said he would remove the community supervision (parole) aspect after Chacon gets out of prison because he will instead be immediately placed back on probation.

“I’m going to do everything in my power to help you so that you can be successful,” Judge Peterson said. “Because I want for you to understand that it’s not over . . . I’m also very hopeful that as things go forward you will see that you do have a chance to still get this right and I expect that you will. And I appreciate you – in a very mature way, a very dignified way – (inaudible) accepting responsibility.”

After sentencing, Judge Peterson asked Chacon if there was anything else the judicial branch could do to assist him be successful on probation upon his release.

“I just don’t want to be here in Safford,” Chacon said.

Judge Peterson said sometimes people conclude that it makes sense to make a fresh start someplace else to get away from family or old friends who previously contributed to poor decision making regarding the use of illicit substances.