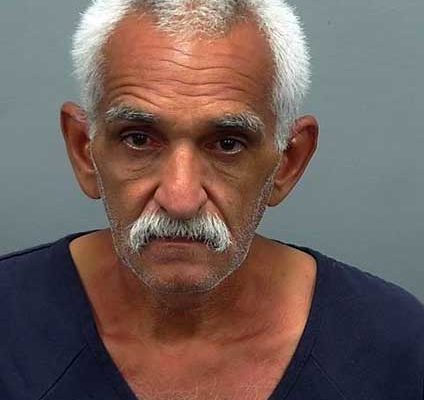 Contributed Photo/Courtesy GCSO: Anthony Ybarra was arrested and booked into the Graham County Adult Detention Facility for stealing TVs from Walmart and then selling them.

SAFFORD – It was the mustache that gave him away.

A Safford officer recognized a distinct white mustache on a subject during an unrelated suspicious nature call late Friday night and linked the man to a shoplifting incident from Wednesday, where the culprit made off with two flat-screen televisions from Walmart.

Officers were initially dispatched to the store at 755 S. 20th Ave. at about 8 p.m. regarding a man who had left the store with two TVs in a shopping cart without paying for them. Officers located a discarded shopping cart at a nearby business but were not able to locate the shoplifter or his booty.

On Friday, officers were dispatched to the 200 block of E. 9th Street at about 10 p.m. regarding a man in a ski mask being seen in the Johnson’s Motors car lot. According to witnesses, the subject fled the car lot and went through property utilized by Lifeline Ambulance.

Officers began speaking to a resident who was in his backyard adjacent to the Lifeline property. The man has had several involvements with officers in the past, usually regarding disorderly conduct and/or drugs.

While interviewing the resident, officers were allowed to search his home. Two men were located inside, one – with that distinguishable white mustache – was seen sharpening a machete he had in his lap.

The man, later identified as Anthony Ybarra, 53, allegedly admitted to stealing the TVs and selling them outside of Thriftee Food & Drug for $100 each. According to an accounting by Walmart, with tax, the property was valued at just more than $300.

Ybarra allegedly said he had hidden the TVs in a canal and then went outside of the grocery store asking people if they wanted to buy a TV. Once he had made a sale, he retrieved the television from the canal and completed the transaction.

Due to Ybarra’s admission and surveillance footage of him allegedly committing the crime, Ybarra was arrested for shoplifting and trafficking in stolen property and was booked into the Graham County Adult Detention Facility.