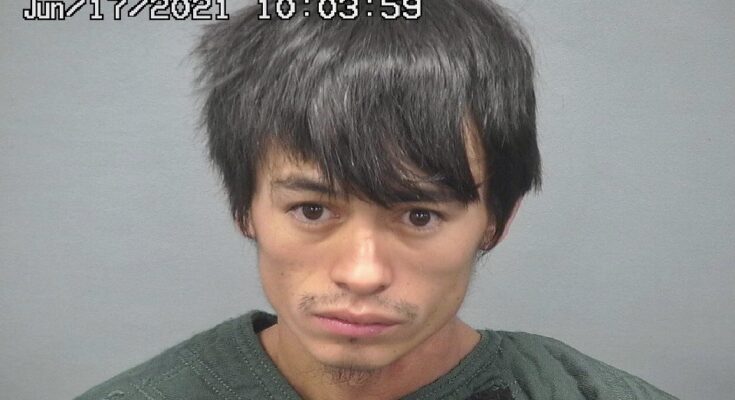 Contributed Photo/Courtesy GCSO: Alexander Aranda, 26,was arrested for DUI, possession of a dangerous drug, and possession of drug paraphernalia.

SAFFORD – Officers are used to hearing all sorts of different excuses why someone in possession of illicit substances, but the reason given to an officer during a DUI stop might have been a bit of a surprise.

According to a Safford Police report, an officer was on patrol on June 16 at about 11:14 p.m. when he noticed a vehicle traveling at 30 mph in a 45 mph zone on U.S. Highway 191. Upon closer inspection, the officer noted the vehicle had a cracked windshield and there were numerous items hanging from the rearview mirror.

The officer then initiated a traffic stop and the vehicle pulled over near the Graham County Fairgrounds. Upon contact with the driver, identified as Alexander Aranda, 26, the officer observed several cues that Aranda may be operating the vehicle while under the influence of some type of substance. The officer also learned Aranda’s driver’s license was suspended for prior DUI charges.

After Aranda denied the officer’s request to search his vehicle, the officer called for the Graham County Sheriff’s Office K9 officer and drug dog KuKui to respond to the vehicle’s location. At that time, Aranda allegedly admitted the dog would alert to the vehicle because there was methamphetamine that belonged to his girlfriend inside.

Aranda then refused to submit to drug recognition tests and was placed under arrest for DUI and driving on a suspended license.

After the K9 Kukui alerted to the vehicle, it was searched and two baggies of meth were located in a cigarette pack in the center console. When shown the drugs, Aranda allegedly advised that he knew the meth was in the vehicle but that he didn’t use it. He then later advised that he had smoked meth in the early morning hours that day so he could stay awake and catch his fiancé cheating on him, according to the report. Aranda advised he believed his fiancé was having a sexual relationship with some unknown man while he slept. In addition to smoking the meth, Aranda said he had inhaled seven lines of meth through his nose to stay awake and catch the unknown male culprit.

Aranda’s vehicle was then towed from the scene for a 30-day impound a blood sample was obtained from Aranda. Afterward, he was booked into the Graham County Adult Detention Facility on charges of DUI, possession of a dangerous drug, and possession of drug paraphernalia.