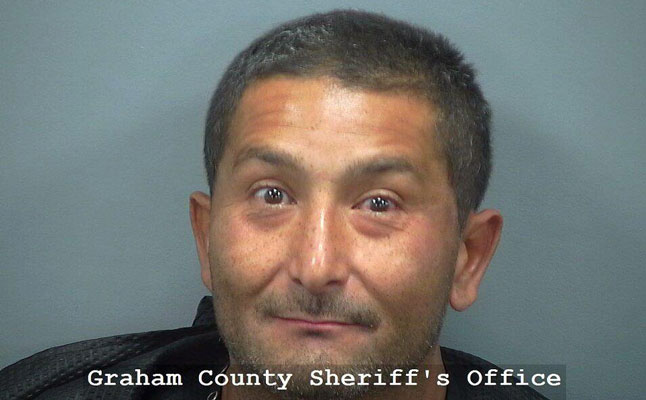 Contributed Photo/Courtesy GCSO: Stephen Nathaniel Salas, 44, was arrested and booked into the Graham County Jail on two counts of arson, burglary in the second degree, criminal damage, and threatening or intimidating.

SAFFORD – First responders rushed to the Sunshine Apartments on Friday, to put out a potentially deadly blaze allegedly purposely set by a disgruntled ex-boyfriend of a tenant.

Stephen Nathaniel Salas, 44, was arrested and booked into the Graham County Jail on two counts of arson, burglary in the second degree, criminal damage, and threatening or intimidating. Official charges were filed against Salas by the Graham County Attorney’s Office on Tuesday.

According to a Safford Police report, authorities were initially dispatched at about 10:30 p.m. to the Sunshine Valley Apartments at 1901 S. 20th Ave. regarding a male subject breaking windows and smoke coming from the same apartment.

The apartment in question was one of four in a single building, with other tenants at home in their apartments, including a 92-year-old woman.

Upon arrival, an officer located the apartment that had been broken into and saw it was on fire. The officers also located blood on the door.

After dousing the blaze, officers spoke to several witnesses who advised Salas had been yelling at the apartment and had broken the windows. The witnesses reported seeing Salas banging on the back door and yelling just prior to seeing a flash come out of the apartment. “It was like a big boom,” one witness reportedly advised. “It was like a flash, like a Molotov (cocktail) thing or something like that.”

“He was screaming and it was really, really scary,” another witness advised, who said Salas was yelling at the apartment as if the tenant was home, however, she was not.

Safford Fire arrived at the scene and identified the frame of a chair located in the apartment as the likely source of the blaze. Two cans of body spray were also collected as evidence.

The apartment had extensive smoke and heat damage and was covered with soot and showed damage as if someone had thrown objects against the walls. More blood droplets were discovered inside and were collected as evidence as well.

After witnesses positively identified Salas and gave officers his direction of travel, officers followed a blood trail and Salas was apprehended in the apartment complex by the laundry building at about 10:41 p.m.

Salas had a laceration on his hand, which was tended to by paramedics with Lifeline Ambulance prior to his incarceration. According to the report, Salas also appeared to be intoxicated.

An officer later spoke with the resident of the apartment that was burned, who advised she had broken up with Salas the day prior. The victim said Salas initially confronted her earlier in the evening around 12 p.m. and wanted to get back together. After rebuking his advances, Salas returned around 7 p.m. and she noticed he was intoxicated. After leaving the apartment, Salas reportedly called the victim at about 10:10 p.m. and was yelling and calling her names. She said she called a friend to pick her up and when she was leaving she noticed Salas by her apartment and that he was yelling obscenities at her.

After leaving, she said she received another phone call from Salas, who continued to yell obscenities and then threatened to kill her. During the phone call, she advised she could hear items breaking.

An officer also spoke with two of Salas’ relatives who advised that he had come to his mother’s apartment and admitted to starting the fire.

After having his hand examined, Salas was transported to the jail and booked on the above-listed charges.