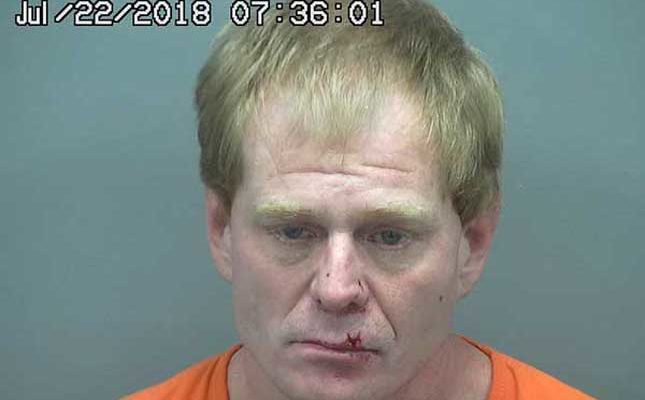 Contributed Photo/Courtesy GCSO: A night of drinking didn’t agree with Kevin Gerstenmier, who ended up in jail with several additional charges pending.

SAFFORD/CLUFF PONDS – A man who annoyed the wrong group of partiers at Cluff Ponds ended up not only getting smacked down but also incarcerated for his drunken behavior.

Kevin Gerstenmier, 42, was booked into the Graham County Adult Detention Facility on charges of assault and disorderly conduct. Additional charges of DUI, driving on a suspended license, leaving the scene of an accident, and criminal damage are pending review by the Safford City Attorney.

The night’s drunken adventure started off poorly for Gerstenmier, who reportedly was already intoxicated when he arrived at Shane’s Place, a bar located at 609 S. 6th Ave.

According to a staff member, Gerstenmier was asked to leave the bar due to acting belligerent, and shortly thereafter employees and patrons heard a vehicle’s tires squealing as if peeling out from the area.

Later on, the employee exited the establishment and noticed his Ford truck had been struck. The impact had pushed his truck into a white Mustang, damaging the car as well.

The investigating officer determined that a vehicle had backed into the truck and then peeled out from the scene.

Later the same night, Graham County Sheriff deputies and a Pima officer responded to Cluff Ponds after a man who was boasting about getting kicked out of Shane’s Place and hitting two vehicles was trying to fight people at the pond.

Upon arrival, the Safford officer inspected Gerstenmier’s black Isuzu SUV, which matched paint transfer found on the truck and had fresh damage that fit the hit-and-run at the bar. The officer took a picture of Gerstenmier and the bar employee positively identified him as the patron who had been asked to leave.

According to witnesses at the pond, Gerstenmier was bragging about his earlier exploits at the bar and claimed to be a member of the Hell’s Angels motorcycle group.

After attempting to ignore Gerstenmier and actually physically moved away from him, Gerstenmier threatened multiple people and allegedly pushed a female and punching a male.

Again the group attempted to leave the scene, but Gerstenmier allegedly threw an object at one of the cars and one of the group struck Gerstenmier multiple times and advised him to not get back up or come back after them.

As officers attempted to take Gerstenmier into custody, he allegedly became belligerent and would not follow officers’ orders. While being taken to jail, he allegedly began striking his head against the vehicle’s cage and claimed police brutality. After being restrained in a leg hobble, Gerstenmier somehow wiggled out of it and began kicking the officer’s window. He then began to spit his blood and pretended to have a seizure, according to a police report.

Paramedics from Lifeline Ambulance then treated Gerstenmier and transported him to Mt. Graham Regional Medical Center, where he was medically cleared. He was then taken to the jail and booked on his assault and disorderly conduct charges.