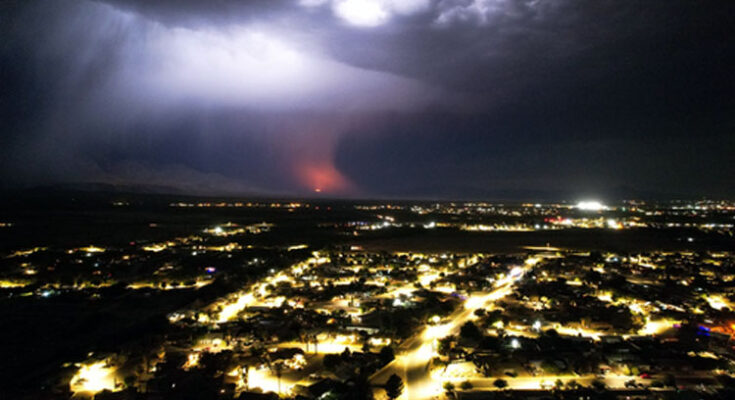 Contributed Photo By Robert Lester: Robert Lester caught this image with a drone minutes after a lightning strike hit the area. The picture appears to show a fire start.

There were numerous lightning strikes in the area between 8 and 10:30 p.m. Friday night with light to moderate precipitation. According to United States Forest Service Safford District Fire Management Officer Everett Phillips, the Forest Service firefighters responded to two lightning-caused fires in the Stowe Knoll area of Mount Graham southeast of Pima. One start was listed at 4.8 acres as of Saturday morning and the other was listed at .33 acres. Phillips said crews have successfully controlled both fires and stopped their progression.

Phillips said there have been additional reports of smoke and fires in other areas, but crews have yet to locate them.

“We’ve got folks out looking for those this morning, to see if those will pop back up or not,” Phillips said.

The area has a possible chance of additional storms on Saturday passing through coming up from the south to the north. Phillips said the Forest Service will be flying reconnaissance missions over the mountain and reminds drone operators to not fly near Mount Graham. Phillips said the precipitation the mountain received helped keep down the number of fire starts, and the same weather pattern will likely be in the area today.

The fire danger is listed as extreme and Stage 2 Fire Restrictions have been in place for the Coronado National Forest since May 22. Stage 2 Fire Restrictions for the Coronado National Forest prohibit building, maintaining, or attending or using a fire, campfire, or stove fire, including charcoal, coal, and briquettes; smoking, except within an enclosed vehicle or building, a developed recreation site; blasting, welding, or operating any acetylene or other torch with an open flame; discharging a firearm, air rifle, or gas gun.

The Frye Mesa area started one of the largest wildfires in Arizona history with a lightning strike on June 7, 2017, as the Frye Fire ended burning roughly 48,443 acres on Mount Graham before stopping. It burned for more than a month and was finally handed back over to local control on July 16 after being listed at 93 percent containment with very few hot edges.

This article was updated Saturday morning.