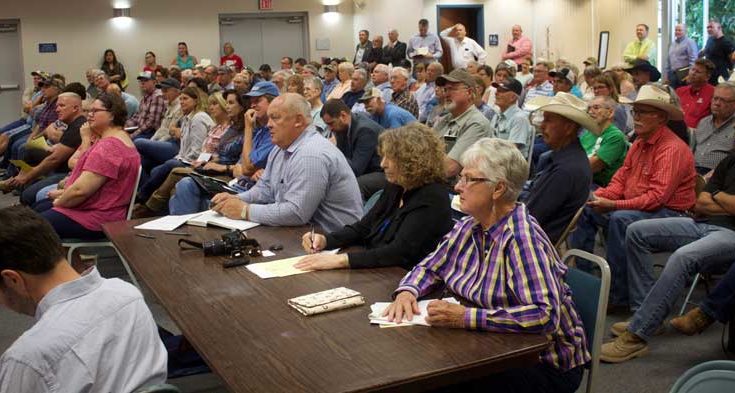 Jon Johnson Photo/Gila Herald: A packed house greeted the Committee on Energy, Environment and Natural Resources on Friday as they held a meeting in Safford to discuss a proposal to meter wells.

SAFFORD – Experts warn that wars of the future will be fought not over oil but over the Earth’s truly most precious resource, water.

Water is the precursor for life, and the debate over water rights in Arizona and in the Gila Valley has been going on for generations and is nothing new to ranchers and farmers. Now, however, the state government is proposing more regulation that would require the metering of private wells.

That proposal has brought the Arizona House of Representatives to have special meetings of its Committee on Energy, Environment and Natural Resources in various rural areas throughout the state. On Friday, that committee held a meeting in Safford at the General Services Building at 921 W. Thatcher Blvd. to a standing-room-only crowd. The committee’s vice chairman, Rep. Russell “Rusty” Bowers, R-Mesa, conducted the meeting. Rep. Brenda Barton, R-Payson, serves on the committee and was in attendance as well. Sen. Gail Griffin, R-Hereford, and Rep. Drew John, R-Safford, were also in attendance with the committee. Griffin, a real estate broker, has pushed for deregulation of the 100-year water supply rule for new developments so Sierra Vista can move forward with a proposed 7,000 home development.

On Friday, area ranchers, farmers and those concerned “preached to the choir” about the Gila Valley’s opposition to the proposed regulation. Some also pointed out that some private wells near the Gila River are already voluntarily metered to be in accordance with water rights regarding the Gila River Indian Community agreement.

Numerous locals with years of water expertise, including Bill Brandau and Scott Alder, spoke to the committee. Brandau asked the Legislature to be careful when making new regulations.

“For every regulation you pass, it may be good but five, six, 18 years down the road it becomes onerous,” Brandau said. “And when I heard that ya’ll going to meter wells – or there was a small group that was wanting to meter wells – it just scared me to death.” (sic)

Graham and Greenlee counties rancher Susan Menges spoke about the proposed regulation and called it nonsensical. She said the best stewards of the water are ranchers and farmers. She said water shouldn’t be taken from rural areas just to satisfy the wants in urban areas, including using water for golf courses.

Locally, the Mt. Graham Municipal Golf Course uses effluent water from Safford’s wastewater treatment facility to water the course. Upon press, the Gila Herald is unaware of how many golf courses in Phoenix use effluent water as well.

One of the most animated speakers (and there was quite a few) was cattle rancher Roger Warner, who, along with his family runs the Eureka Springs in Klondyke.

“I want to know why you want to meter my livestock springs,” Warner asked. “They want to meter our wells for one reason, they want to regulate it. That’s all it’s all about . . . They want to tell us how much water I can give to my cows . . . My cows have to wait for water because some guy in Phoenix wants to fill his swimming pool? I don’t think I’m going to be in for that; I know my cows aint.” (sic)

“My cows need to drink what their body tells them to drink not what some stinkin’ politician in Phoenix tells that cow she can drink,” Warner said. “Regulation is going to kill us just like it’s killing these farmers in the Gila Valley.”

When Bowers joking said Warner’s cowboy hat wouldn’t be worth as much with a bullet hole in it, alluding the movers and shakers in Phoenix would take umbrage with his words.

“I’ve been shot by a hell of a lot better people than them guys,” Warner replied.