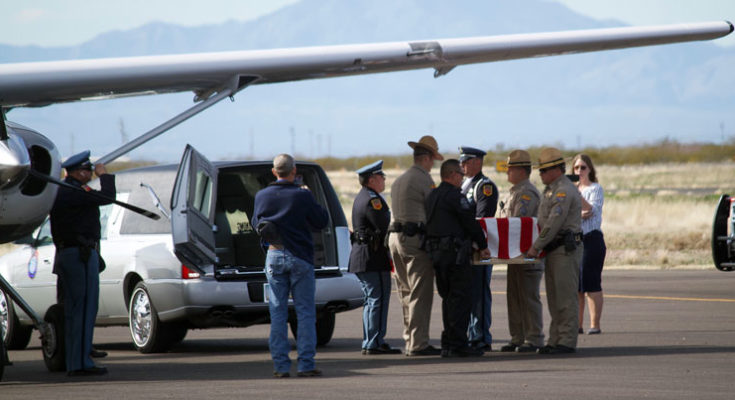 SAFFORD – Multiple law enforcement agencies from throughout Graham and Greenlee counties honored a fellow officer Friday as they escorted the deceased remains of El Paso Police Department detective Richard B. Allbee, Jr., 51, to the Safford Regional Airport. Allbee was a 19-year veteran with the El Paso Police Department and had also served in the Texas Army National Guard.

On Sunday, Feb. 9, Allbee and his wife, Norma Allbee, 58, were returning to El Paso after a trip to Mesa and were eastbound in their Chevy pickup truck on U.S. Highway 70 when a westbound Ford pickup truck driven by John Savage, 50, crossed the centerline and the trucks collided head-on at the Bylas Bridge just west of Bylas.

Richard Allbee was deceased at the scene, while Norma Allbee and Savage were separately airlifted to Banner – University Medical Center in Tucson for treatment of their injuries. According to the Arizona Department of Public Safety, alcohol impairment is believed to be a factor in the collision.

On Friday, other local first responders, including firefighters and EMS workers joined in the tribute along the procession route. Once at the airport, members of the Texas Honor Guard transported Allbee from the funeral hearse into a Texas State Trooper plane with the assistance from Arizona DPS officers. The plane then taxied past the envoy of officers and took off to fly Allbee back home.