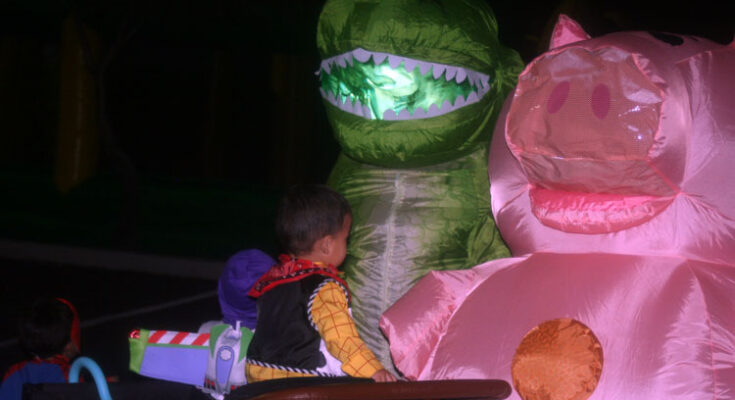 It was most confusing. On a Saturday night, Oct. 29, two days before Halloween, many people, children, and adults, were wearing costumes. They were dressed as witches and pirates, and with various types of makeup on their faces.

One man was taken aback as he entered Bashas’ grocery store to buy some milk. He thought to himself, “Wait a minute. Halloween was supposed to be on Monday, the 31st.”

Surprise, surprise! Morenci Community Services was hosting a night of fright and hundreds from the Morenci-Clifton communities were involved. It was a surprise only to those who were not aware of the event, as in people who had not read about the event in the activity guide published seasonally by MCS.

The parking lots in front of the west end of the Morenci Plaza – the Morenci Club, library, theatre, and fitness center – were blocked off from vehicles. Instead. the area was swarmed by “creatures” dressed as ghouls, a green dinosaur, a giant pink pig, two folks dressed as Holstein cows as well as someone dressed as a type of royalty. It was a particularly unique outfit in that the fellow, dressed with a crown and a long robe, was on stilts and stood out far above the rest of the crowd.

It was reminiscent of the Freeport McMoran Company Picnic held on Oct. 1, in which at least 1,000 folks attended and crowded the same area of the Morenci Plaza Loop to enjoy the band, Santana.

And it was quite a crowd with hundreds of children and parents waiting in long lines to eventually make their way to the Fitness Center where surprises and treats awaited them. There were tables set up in the portico surrounding the library where kids had their faces and hands painted.

The baristas at Starbucks, adjacent to the Fitness Center, were busy, busy as they were swamped with customers throughout the night.

Those who ventured to the outdoor swimming pool were in for a shock as one of the two giant skeletons normally in the Fitness Center foyer, floated about in the pool

The sound that most permeated the night, was not of fright, instead, it was the laughter of children and their parents who were having a night of true family fun.