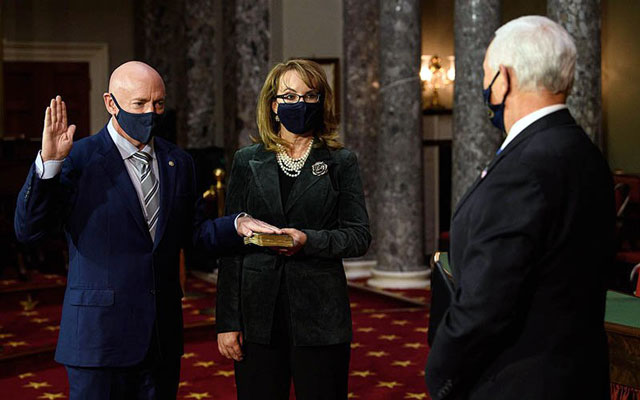 Photo By Nicholas Kamm/Senate pool: Sen. Mark Kelly, D-Ariz., is sworn in during a reenactment by Vice President Mike Pence as Kelly’s wife, Gabby Giffords, the former Democratic congresswoman from the Tucson area, holds a family Bible in the old Senate chamber of the U.S. Capitol. Kelly’s swearing-in gives Arizona two Democratic senators for the first time in almost 70 years.

WASHINGTON D.C. – Mark Kelly can drop “senator-elect” from his title.

Less than a month after Election Day, Kelly was sworn in as the junior senator from Arizona on Wednesday and will serve the remaining two years of the late Sen. John McCain’s term.

Kelly, who ran on a promise to be a bipartisan voice in the Senate, also cast his first vote Wednesday – a straight party-line vote on the nomination of Judge Kathryn C. Davis to the U.S. Court of Federal Claims that passed 51-45.

It was the end of almost two years of campaigning and a whirlwind few weeks, with Kelly sworn in a month earlier than other new senators because he is taking over for McCain, who died in 2018. Republican Martha McSally, who was appointed in 2018 to hold McCain’s seat, stepped down when this month’s election results were certified.

Kelly was not available for comment Wednesday, but Sinema said in a statement after his swearing-in that she looked forward to “partnering with Mark Kelly to cut through Washington dysfunction and deliver results for everyday Arizonans.”

It was Sinema, in purple hair and a zebra-striped sweater, who escorted Kelly to the well of the Senate and held the Bible on which he was sworn in by Vice President Mike Pence.

The Bible belonged to the grandmother of Kelly’s wife, the former Rep. Gabrielle Giffords, who held it at a separate ceremonial swearing-in a short time later in the old Senate chamber, also with Pence.

Senate Minority Leader Chuck Schumer, D-N.Y., welcomed Kelly, a former Navy pilot and former astronaut. While those jobs likely did not prepare Kelly for his new job, Schumer’s statement said, his wife’s time on Capitol Hill already made him a “part of the family” in Congress.

Schumer went on to call Kelly “a devoted and honorable man, and we are delighted to welcome him to the Senate Democratic caucus and the wider Senate family.”

Kelly was joined by Giffords, his two daughters, and his twin brother Scott, a fellow astronaut. After the swearing-in, they conversed with Pence about Mark Kelly’s time in space before posing for photos.

The day before his swearing-in, Kelly visited McCain’s grave at the U.S. Naval Academy, drawing praise from McCain’s daughter, Meghan, who called the gesture “lovely and touching.”

Schumer acknowledged in his statement the difficult journey Kelly and Giffords took to return to Washington.

Giffords was attending a constituent event in Tucson in January 2011 when a gunman opened fire, killing six people and wounding 13, including the congresswoman, who was shot in the head at close range in the assassination attempt.

“Everyone continues to be inspired by Gabby’s recovery, by Mark’s devotion, and the courage it took for their family to re-enter public life and public service,” Schumer said.