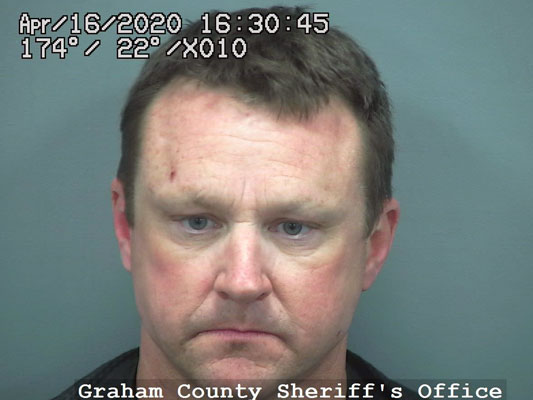 Christensen previously appeared in front of Justice of the Peace District 2 Judge Wyatt Palmer on Nov. 19 for a preliminary hearing in which the charges were bound over to Graham County Superior Court after Judge Palmer found the charges viable. A fourth aggravated assault charge was dismissed.

The charges stem from a traffic stop that went awry on April 16. According to Safford Police reports, Christensen was extremely agitated after being pulled over for minor traffic violations and appeared to be under the influence of some type of drug. Officers had encountered Christensen earlier in the day and noted he could not stand still and was making very fast, animated, jerky movements.

On Aug. 13, the Safford Police received a toxicology report from the Arizona Department of Public Safety Southern Regional Crime Laboratory regarding a blood sample taken from Christensen during his arrest. The report listed Christensen was positive for amphetamine at 92 nanograms per milliliter of blood (ng/ml) and methamphetamine at 160 ng/ml of blood.

Body camera footage from the investigating officer during the traffic stop shows Christensen acting erratically and repeatedly cursing at the officer while calling family members to respond to the scene to video the interaction. When the officer requests Christensen’s driver’s license and registration – an everyday occurrence during a traffic stop – he is met with an accusation of harassment.

Christensen then closed the door and again refused to exit his truck and had to be forcibly removed from the vehicle. He then seemingly resisted as the officers attempted to place him into custody. At that time, his wife drove up to the scene and stopped in the middle of the street.