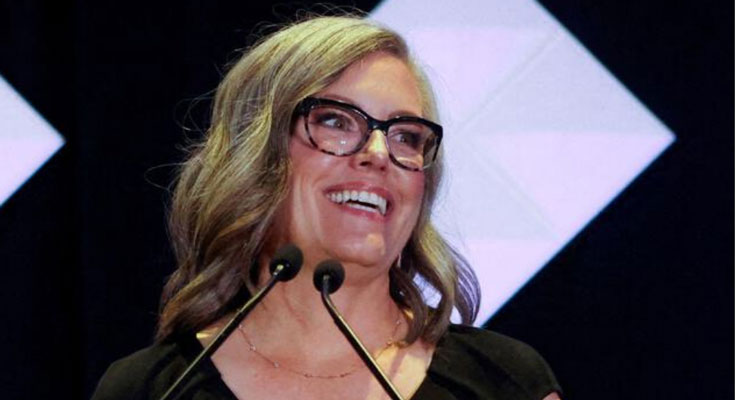 Katie Hobbs has been elected as Arizona’s next governor giving the state a Democratic governor and both senators for the first time since 1951.

PHOENIX – Arizona voters have spoken and Katie Hobbs has been elected as governor. She is the first Democrat governor in Arizona in over a decade, with the last one being former Gov. Janet Napolitano (2003-2009).

Hobbs won a close race against Kari Lake, a former TV news anchor who spouted election fraud conspiracies and was endorsed by former President Donald J. Trump. Lake encouraged her followers on Twitter to make sure their ballots had been accepted. Check your ballot status through the Arizona Voter Information Portal of the Secretary of State’s Office here.

A large vote tabulation release from Maricopa County with nearly all of the county’s remaining outstanding votes was released Monday night and showed an extreme statistical likelihood that Hobbs will continue to hold off Lake as the rest of the votes are counted.

It is the first time in 70 years Arizona has had Democrats serving as its governor and both senators. That last occurred in 1951 when Gov. Daniel D. Garvey was in his last year and served along with Sen. Ernest McFarland and Sen. Carl Hayden.

On Sunday after a vote tally release, Hobbs re-tweeted this message from her campaign manager.

Republicans will have a chance to take back one of the senator positions in the next presidential election cycle in 2024 when Sen. Kyrsten Sinema’s seat comes up for election. Sen. Mark Kelly – who was elected in 2020 to finish the late John McCain’s term – was re-elected to serve a full 6-year term by defeating Blake Masters, another election-denier who was endorsed by former President Donald J. Trump.

The race for to be the representative in Congress for District 6, which includes Graham and Greenlee counties, is going down to the wire with a final vote dump from Pima County likely ultimately deciding the winner.

Republican Juan Ciscomani has been projected to defeat Democrat Kirsten Engel for the vacant House seat left by outgoing Democrat Anne Kirkpatrick. The seat is new due to redistricting.

As of Monday evening, Ciscomani had a 3,502-vote lead that appears to be unsurmountable with the possible remaining votes left to be tabulated. While there are roughly 7,427 ballots left to be tabulated in Pima County, it is unknown how many of them come from the area covered by District 6. Pima County only has a portion covered under District 6, unlike Graham, Greenlee, and Cochise counties which are almost entirely covered except for the reservation lands. As of Monday night, there were 4,326 votes left to be tabulated in Cochise County, which has voted in favor of Ciscomani by a greater than 2-1 advantage. Greenlee County reports a complete tabulation, and the last amount shown by Graham County was just 118 votes. The win helps the Republicans narrowly take back control of the House of Representatives.

All results are unofficial until canvassed by the counties which run the elections and the state which oversees them.

Democrat Kris Mayes was leading for attorney general over Republican Abraham Hamadeh and Democrat Adrian Fontes over Republican Mark Finchem for Secretary of State. This race may go to a recount.