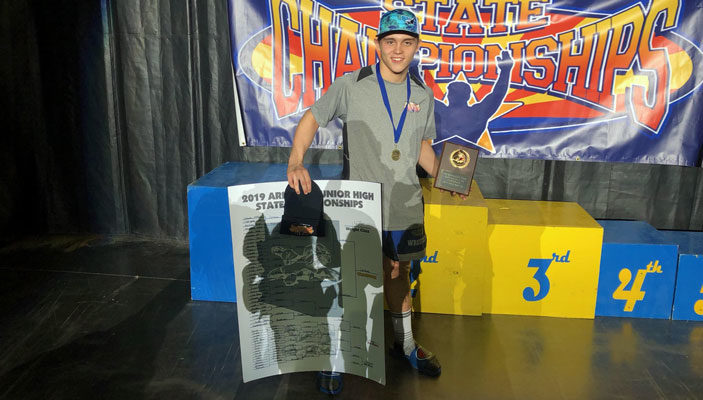 PRESCOTT – Safford Middle School wrestler Kaleb Cordova capped an unbeaten season with a state championship and the Outstanding Wrestler award at the state tournament at the Findlay Toyota Center in Prescott on Jan. 29.

Cordova finished 35-0 on the season and had five pins in the state tournament to become Safford Middle School’s first state champion wrestler at 142 pounds.

The Bulldogs finished in third place as a team, behind first-place Valiante College Prep and second-place Somerton Middle School.

Other wrestlers who placed at the tournament included Mikey Arrellin in second place at 154 pounds, Janacio Rios in third place at 125 pounds, Braxon Young in fifth place at 133 pounds, and Jonathan Abeyeta in sixth place at 180 pounds.

Monster Rios lost his first match but fought back to win seven straight matches to finish in sixth place, which was an unusual accomplishment.

“Most of these kids have been at it since August, coming into the wrestling room after football and cross country practice and get after it,” wrestling coach Philip Ornelas said in an e-mail.

“They made a goal at the beginning of the season to bring home team plaques. They were able to bring home first-place plaques from (the) San Manuel Invitational, Safford Invitational, Benson Invitational, Red Mountain Duals (in New Mexico), and the EAJHA Regional Tourney. Their hard work showed throughout the season. I can’t say enough about the dedication that these kids and assistant coaches have shown all season. I can’t wait to see what is in store for these kids the next five years, especially with the legend Hall of Fame coach (Herman) Andrews waiting for them at the high school level. It’s exciting.”