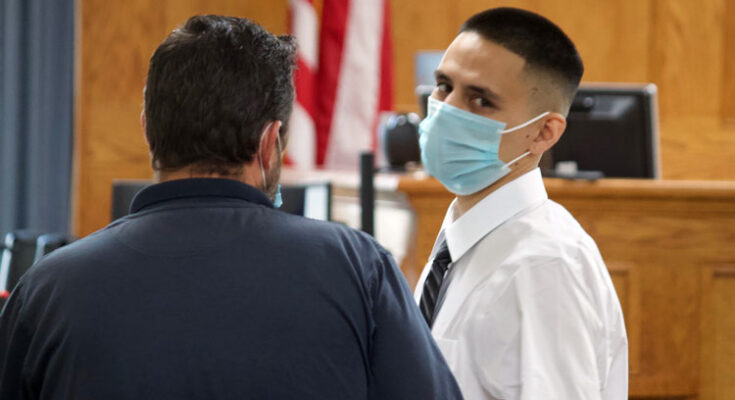 Jon Johnson Photo/Gila Herald: Jace Austin Sais was taken into custody after the sentencing. He was ordered to 2.5 years in prison for the negligent homicide of Isabel Aparicio in March 2017.

SAFFORD – More than three years after Isabel M. Aparicio, 20, of Solomon died in a single-vehicle rollover, her passenger, Jace Austin Sais, 23, of Avondale, has been sentenced for contributing to her death.

On June 25, Sais pleaded guilty to negligent homicide – a Class-4 Felony – and aggravated assault with a deadly weapon – a Class-3 Felony – in front of Judge Scales during a change of plea hearing held in Globe. Judge Scales retired in July but performed the sentencing Thursday afternoon. According to the plea agreement, additional charges of reckless manslaughter aggravated assault, and endangerment were dismissed.

Negligent homicide carries a sentence of between 1 to 3.75 years in prison, but, according to the plea agreement, Judge Scales had the option of sentencing Sais between 1 to 3 years in prison. The agreement also stipulated 3 years of standard probation on the aggravated assault charge to be initiated upon his release from prison. If Sais fails on probation, he will face an additional prison term of between 2 to 8.75 years.

After weighing mitigators and aggravators, Judge Scales gave Sais the presumptive term of 2.5 years, to be followed up by three years of standard probation o the charge of aggravated assault.

Isabel’s mother, Debbie, and brother, Reynaldo, spoke on her behalf at the sentencing. Sais’ family members, including his mother, aunt, and brother, all spoke on his behalf and he addressed the court as well.

Debbie said she felt for Jace and his mother, but that she will still have her son and he will be able to live his life while all she has left of her daughter is her memories.

“I forgive him,” Debbie Aparicio said. “Because is God can forgive me for all my sins I have to forgive him. Because I don’t want to die tomorrow and have this hate on me.”

While her faith encourages her to forgive Sais, Debbie Aparicio also expressed her disappointment in the judge giving the presumptive sentence instead of the maximum allowed.

“I am very disappointed in the outcome,” Debbie Aparicio told the Gila Herald. “I feel that my daughter’s life didn’t matter to this judge are these attorneys. She did matter, and I felt that he should’ve gotten the three years. It’s not going to bring her back but it’s not fair to her or to us.”

Sais’ attorney, Faisal Ullah, denounced the police’s version of events and said it was a tragic accident that his client has taken responsibility for his actions that contributed to the crash. He then asked for a mitigated sentence of 1 year in prison.

“This really is a tragic, tragic accident,” Ullah said. “The objective evidence, in this case, does not in any way leave one to suspect that this kid murdered with intentionality . . .”

“He created an unreasonable noise that contributed to the crash,” Ullah said. “He did not intentionally cause her death.”

Graham County Attorney-elect L. Scott Bennett said the maximum sentence of 3 years in prison didn’t even come close to getting justice for the Aparicio family, but in this case with the evidence at hand that was the most one could get for the crime that could be proven.

Sais read from a prepared statement and expressed his remorse.

“I wish I had done something different that day,” Sais said. “I loved Isabella and we had a life planned together . . . I can’t say anything but I’m sorry.”

According to an initial report from the Graham County Sheriff’s Office, Aparicio died in the early evening of Friday, March 10, 2017, when her green, 1994 Ford Escort went off the north side of Solomon Road onto the dirt shoulder and into a concrete ditch just east of the San Simon Bridge. The vehicle dragged in the cement canal until it flipped and came to rest on its top north of the canal.

At the time, Sais allegedly told investigators that he was in the front passenger seat looking out the window when Aparicio called out his name and he looked forward and saw the vehicle going off the roadway. Sais only suffered cuts to his legs and advised that he believed Aparicio was speeding when the crash occurred.

One of the difficulties for prosecutors in proving their case against Sais was the initial belief that Aparicio’s death was simply a motor vehicle accident. By the time authorities believed something more sinister had actually occurred, Aparicio’s body had been buried and tangible evidence was nary to be found.

However, investigators discovered subsequent information that indicated Sais was not fully forthcoming in his previous statements. Some of the new information included a cell phone video of an argument Sais and Aparicio had while driving just prior to the crash in which Sais yells at Aparicio, calling her names and advising her that if she didn’t stop the car he would “(expletive deleted) her up.”

An investigator then examined the wrecked car that was being stored at the Graham County Maintenance Yard and deduced that Sais couldn’t have been in the front passenger seat as he claimed or he would have suffered severe injuries due to the damage to the car.

Sais was then interviewed again and allegedly admitted to having the argument with Aparicio prior to the crash. He then allegedly said that he climbed into the backseat, grabbed Aparicio’s throat, and choked her as the car approached the bridge.