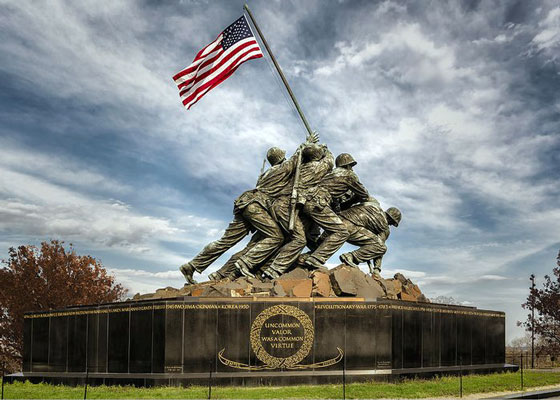 This story is about the iconic statue of U.S. Marines planting the American flag on top of Mt. Suribachi on the island of Iwo Jima in the Pacific Theater of World War II. The statue is modeled from a photo of that action.

It was taken by Associated Press photographer Joe Rosenthal.

What most people are probably not aware of is that it was not the first photo of an American flag being hoisted atop Suribachi. That happened a few hours before Rosenthal took his photo on Feb. 23, 1945.

The first photo was taken by Marine Sgt. Louis R. Lowery, a staff sergeant with Leatherneck magazine, the Marine Corps’ official publication. Lowery’s photo is not as impressive as Rosenthal’s and Marine higher-ups thought it was a better representation of the battle.

Not only was Lowery’s photo buried somewhere in Marine archives but there was also controversy involving the identities in both photos. It was not until 2016 that the Marines corrected the mistaken identities. The investigation eventually involved the FBI and its vast resources to correctly identify who was there and who wasn’t.

It was initially thought that Marine PFC Rene Gagnon and Navy Petty Officer 2nd Class John Bradley were in the Rosenthal photo. But after intense research, it was determined that PFC Harold Schultz and Cpl. Harold Keller were in the iconic flag-raising.

The FBI’s investigation included closely examining the patterns of camouflage covers on Schuller’s and Keller’s helmets. There were also other photographs taken at the time that helped the FBI correctly identify each Marine.

Bradley said that as a child he would ask his father about Iwo Jima and his dad would immediately change the subject. The author learned later in life about his father’s experiences. “He was involved in a massacre. He was a corpsman. His friends died.”

“He couldn’t sleep for years after he married mom. He actually cried and shook in his sleep. This was horror.”

James Bradley said that for years he felt strongly that the Marine Corps needed to correct and change identifications of the four individuals in the two photos.

While it was learned that Gagnon was not in the Rosenthal photo, he did play an important role in the flag-raising. He was charged with taking the bigger flag to the top of Suribachi. It was the flag seen in Rosenthal’s photo.

A Marine Corps statement said of Gagnon, “Gagnon did play a role in the flag-raising. It was his job to carry the larger flag to the top and safely return the first flag for safekeeping. Without his efforts, the historical event might not have been captured, let alone occurred.”

The statement further reads, “Regardless of who was in the photograph each and every Marine who set foot on Iwo Jima or supported the effort from the sea or air around the island is and will always be part of our Corps’ cherished history.” Those words were from General David H. Berger, Commandant of the Marine Corps.

Ira Hayes, an Arizona native American was among those involved in the flag-raising on Suribachi. It is his hand seen raised in the effort to plant the flag. The American Legion post in Sacaton is named after him.

According to Vietnam veteran Steve Guzzo, Hayes was incredible and valued honesty. He knew that one of the men in the flag-raising had been misidentified. He literally walked all the way from Arizona to Oklahoma to advise the family of one of the men at the flag-raising that it was their son, and not someone else, who had actually been part of the historic event.

The Marines on Suribachi Some of the men in the flag-raising did not make it off of Iwo Jima. It is where their bodies remain but thanks to photographer Rosenthal they are still part of the cherished history of the U.S. Marine Corps via the statue that reminds Americans of the great freedoms they enjoy. And the greatness of the United States Marine Corps.

Ah, lest we forget.