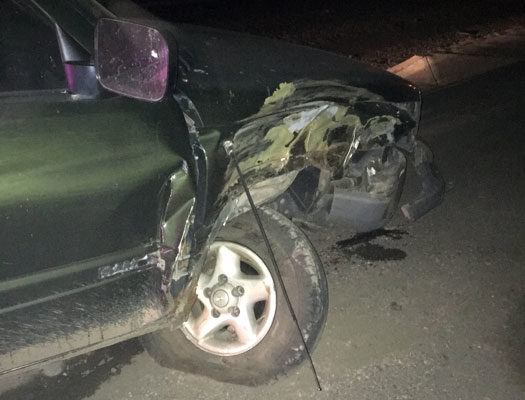 Contributed Photo/Courtesy SPD: This picture shows the damage to a truck after it struck a utility pole and knocked out electricity to a Safford neighborhood on Christmas.

SAFFORD – It wasn’t a sleigh and reindeer that plowed into a utility pole Christmas Day, but the driver of the truck in a hit-and-run may have had a red nose.

Officers were initially dispatched at about 8:34 p.m. to the Colonial Village subdivision regarding a loss of electricity to the neighborhood. At about 9:25 p.m., County Dispatch advised that a truck had struck a utility pole in the 1400 block of 1st Avenue, causing the power outage.

The 1996 Dodge pickup truck came back as being registered to Jason Johnson, of Safford, but nobody was located in the vicinity of the crash.

The following day, an officer spoke to Johnson on the phone, who allegedly admitted to striking the utility pole and leaving the scene. Johnson said a Ford Bronco had cut him off, causing him to swerve and strike the pole. He also advised he didn’t call in the collision because he didn’t have a phone. He said he walked over to Circle K and called his mother to give him a ride because he just wanted to go home.

A short time later, three male subjects arrived at the scene and attempted to remove the truck without success. Johnson then left with the three men in their SUV.

On Friday, Dec. 28, the officer contacted Johnson and told him his truck could be released from impound. The officer also advised Johnson of what he had seen on the video and said the report would be sent to the Safford City Attorney for review and charging for leaving the scene of a collision.