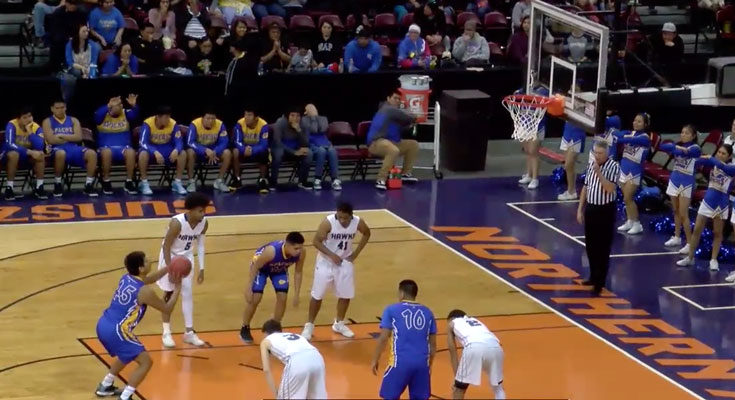 Jaden Preston shoots a free throw in the fourth period of the 1A state boys basketball semifinal. The Gregory School just edged Fort Thomas, 51-48, to move onto the championship game.

PRESCOTT VALLEY – The No. 3 Fort Thomas Apaches battled to the end and came back from down 13 to make it a two-point game with mere seconds left to play, but No. 2 Tucson The Gregory School pulled out the win, 51-48, to advance to the 1A State Boys Basketball Championship.

The teams came out shooting from deep as Hawks’ guard Demari Harris hit an NBA-level 3-pointer and was matched Apaches’ guard Brad Johnson. However, The Gregory School hit two more 3’s and added three more points from the free-throw line to go up 12-3 early.

Johnson came back with a couple of jumpers and Latrell Titla scored down low just before the buzzer to cut Gregory’s lead to 12-9 by the end of the first period.

Harris came out in the second period with another 3-pointer making all of the field goals made by Gregory in the first period-and-a-half being from beyond the arc.

Fort Thomas played good defense in the second period but kept turning the ball over on simple mistakes and missed a couple of open shots at the rim, which allowed Gregory to keep its lead.

Johnson kept the Apaches close by hitting a jumper and then an and-1 play to cut the Hawks’ lead 15-14.

Tomari Harris then lit up the scoreboard with a couple of shots and a deep 3-pointer to give Gregory a 26-18 lead over Fort Thomas at the half. Johnson had 12 of the Apaches’ 18 points, with Titla scoring four and leading regular-season scorer Malachi Rogers only having one bucket for two points at the halfway mark. Johnson would finish with a game-high 19 points, followed by Titla with nine.

Johnson continued scoring in the second period but he didn’t get much help, with the only other field goals in the third period being a bucket each by Jaden Preston and Tagipo Fiame.

Conversely, Tomari Harris, who finished with a team-high 17 points, continued his scoring as well, but he had more help and, after a fast-break layup, Gregory had its biggest lead of 12 points, 37-25, with 3 minutes left in the period.

Johnson continued to score and got his 19th point, but he also got his fourth foul with 1:51 left in the third period and had to take a seat on the bench. Gregory kept its big lead and headed into the fourth up 13, 43-30.

Rogers opened the scoring in the fourth with a 3-pointer, and then the Apaches got a break with Falcons’ center Brightstar Benson fouled out, but Johnson would foul out later in the fourth period as well.

Points were scarce, however, and Rogers and Skylar Kindelay both missed two free throws and nobody scored until Titla hit from down low at 4:40 left in the game to drop the lead to single digits, 43-35.

Gregory got its first points of the fourth period with 3 minutes left in the game when Demari Harris hit Josiah Prior for an easy layup.

The Hawks then played keep away since there is no shot clock in high school basketball, but big-time 3-pointers by Titla and Kindelay brought the Apaches within four, 49-45.

Again, Gregory held the ball, not attempting to look for a shot but just trying to waste the remaining time and Fort Thomas finally took a foul with 38 second left in the game.

Anderson Mort hit 1-2 from the free-throw line on the foul and Kindelay brought the ball down the court and hit a 3-pointer from the parking lot to make it a two-point game, 50-48, with 31 seconds left to play.

Demari Harris then traveled with the ball, and the Apaches had a chance to tie or take the lead with 21 seconds left to play but Fort Thomas was called for a traveling violation as well.

Rogers intentionally fouled Demari Harris, who made 1-2 to push the lead back to three points, 51-48, with 12 seconds left to play.

The Apaches brought the ball down the court but Kindelay was smothered and Cameron Anderson had to take an awkward last-second shot, which bounced off the backboard, off the rim, in and out as The Gregory School held on to win, 51-48.

No. 2 The Gregory School will now face the No. 4 Ray Bearcats in the final at Findlay Toyota Center in Prescott Valley on Saturday, starting at 6 p.m.