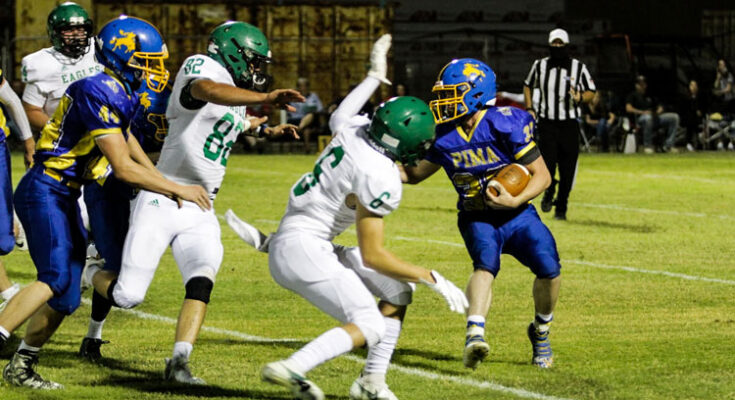 Photo By Stan Bonifacio: Pima’s Garrett Curtis looks for an opening in the Thatcher defense during their game Friday night. Half of the Pima team has been quarantined due to a COVID-19 exposure and it will cancel its next two games.

Games versus St. Johns and Benson to be canceled

PIMA – Half of the Pima High School’s football team has been quarantined for COVID-19 and will have to cancel its upcoming games against St. Johns and Benson.

According to contact tracing done by the Graham County Department of Health and Human Services, a Pima football player tested positive for the virus, and about half the team had exposure to him. The exposure to cause a quarantine is 15 minutes or more of close contact without any masks being worn. The exposure was reportedly done Friday, Oct. 2.

Pima School Superintendent Sean Rickert said the school will follow Arizona Interscholastic Association regulations regarding return to play and that the team will possibly be able to return for its Oct. 23 game at Willcox.

“We’ll have to see what the county gives us as far as dates (of quarantine),” Rickert said.

He added that he wasn’t sure if any of the Thatcher team was exposed during the game either.

“The county health department will have to do their investigation as far as to contact tracing and figure out if the player was on the field and who he was on the field with,” Rickert said.