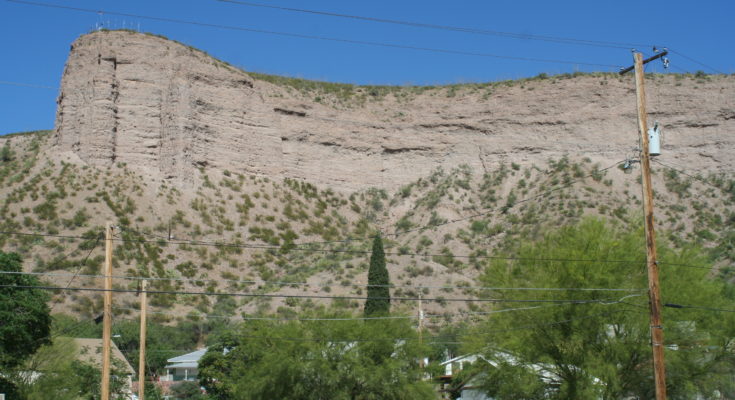 Walt Mares Photo/Gila Herald: The bear was reportedly in the Mares Bluff area when it was shot.

CLIFTON – The Greenlee County Sheriff’s Office reportedly shot and killed a bear who they believe had wandered too close to a residential area on Tuesday, according to a report from the Arizona Game & Fish Department.

According to Arizona Game & Fish Department Public Information Officer Mark Hart, Game & Fish was notified about the bear at about 5:30 p.m. by the Clifton Police Department. Hart said the information given to Game & Fish at that time was that the bear was near the Greenlee County Courthouse.

Roughly two hours later, Game & Fish was advised that the bear had wandered into another residential area and the Greenlee County Sheriff’s Office had shot the bear.

Video taken by Mariah Gipson shows the bear tumbling down a hillside after being shot. The bear in the video was later reported to be a 5- or 6-year-old male bear weighing approximately 265 pounds. The area the bear was shot has been reported as being in Mares Bluff. Hart said the Sheriff’s Office decided the best course of action was to exterminate the bear. While no houses can be seen in the video, the area has homes at the bottom from which the bear had passed through.

“They made a determination that it was a public safety threat based on where it was,” Hart said.

The Sheriff’s Office was later advised to dispose of the bear in a landfill.

Earlier this month on May 4, a juvenile black bear that had wandered into a residential neighborhood in Thatcher near a school was tranquilized and then euthanized by the Arizona Game & Fish Department.

According to Hart, the department’s policy toward male nuisance black bears is to euthanize them. That policy came about after a young girl was attacked on Mount Lemmon near Tucson in 1996 by a relocated male black bear.

The black bear is the only bear species still found in Arizona and generally hibernates from November through March. They are omnivores with a range of between 7 – 50 square miles and mostly live in woodland habitats in Arizona. While they are called black bears, they range in color from black to brown and even blonde in some cases, with males growing up to about 350 pounds and females to about 250 pounds.

Editor’s Note: This article was updated Tuesday, May 26, with more information from the Arizona Game & Fish Department.