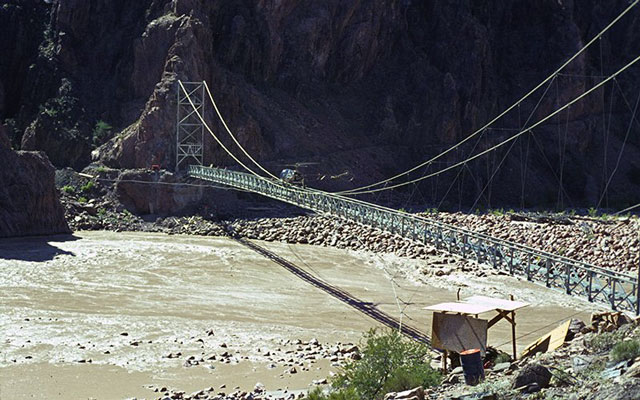 Photo by Dan Cockrum/Courtesy of the National Park Service: Construction on the Trans-Canyon Waterline started in 1965. This photo shows a contractor’s helicopter delivering materials to attach the pipe beneath the Silver Bridge over the Colorado River.

PHOENIX – On the North Rim of the Grand Canyon, water from Roaring Springs cascades down Bright Angel shale to the canyon floor below. This continuous spring provides drinking water to millions of visitors who come to the South Rim each year, pumped through a 6-inch aluminum pipe that’s buried beneath the North Kaibab Trail.

Built from 1965 through ’70, the Trans-Canyon Waterline is falling apart, and it has been for years.

This month, construction begins to replace parts of the failing line and build two water treatment plants. The project’s completion date is 2027, and planners expect minimal disruption to water supply or distribution.

The waterline is considered the backbone of Grand Canyon National Park’s water system. On average, it carries 190 million gallons of drinking water to more than 5 million visitors and 2,500 residents in the Cross Canyon Corridor and the South Rim area. But from the beginning, it has been plagued by repeated failures.

The long-planned project comes on the heels of several weeks of conservation measures after a break in early September; those measures were lifted on Sept. 27.

“Each break disrupts water delivery until repairs are completed,” Joëlle Baird with Grand Canyon National Park’s public affairs office said in an email. Those repairs can cost about $25,000 each, and water disruptions can last days or weeks.

The latest break triggered water conservation measures, including reduced hours at laundromats; visitors had to camp without water hookups; concessionaires switched to disposable dishes and cutlery, and low-flow water practices were put in place.

The 6-inch waterline, which has operated for more than 50 years, has outlived its projected life span by about 20 years.

Renowned Grand Canyon painter Bruce Aiken knows this well. For 33 years, he and his family lived 5½ miles below the North Rim at Roaring Springs. As an employee of the National Park Service at the time, he made sure the pumphouse worked, and in his spare time, Aiken captured the wonder and grandeur of the Grand Canyon on his canvas.

“As soon as they (NPS) opened it, it hadn’t been operating for more than a couple of months and a flood came down Bright Angel Canyon and ripped it all out,” Aiken recalled. “It had to be rebuilt again and finally reopened in 1970, and right away it started to break.”

Aiken remembers how frequently the aluminum pipe would fail.

“I want to remind you how expensive it is to make repairs on that because the tools have to be brought in by helicopter … in a sling load, including a giant welder,” Aiken said, adding that digging up the pipe creates a “huge trench in the middle of the trail.”

The upgrade will relocate the water intake from Roaring Springs to Phantom Ranch and replace 3 miles of pipe from Phantom Ranch to Indian Garden. Other improvements include upgrading the electrical line between the ranch and the garden, a water treatment plant at the South Rim, and a smaller plant at Phantom Ranch will be built.

All repairs will keep the pipeline’s function, engineering, and overall design to maintain the pipeline’s historic nature and the significant role it plays in the Grand Canyon.