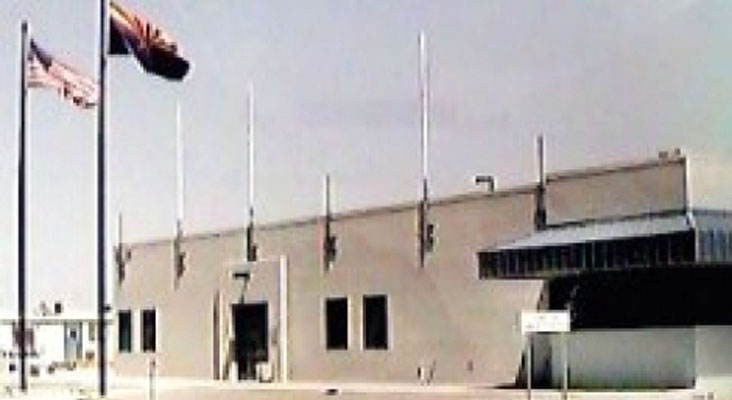 The majority of Graham County’s new positive tests for COVID-19 released Friday came from ASPC-Safford and was a cumulative drop that had accrued since Dec. 28, 2020. Previous incarceration cases came only from the federal correction facility.

SAFFORD – The Graham County Department of Health and Human Services (GCDHHS) dropped a bombshell of a new daily record for COVID-19 cases on Friday, however, most of them were from a cumulative reporting from local correctional facilities since Dec. 28, 2020.

The Arizona Department of Corrections Rehabilitation and Reentry operate two sites in Graham County, collectively known at ASPC-Safford. The first site is located in San Jose and the second site is Fort Grant in Bonita on the other side of Mount Graham. In December 1997, the Arizona State Prison at Fort Grant became the Fort Grant Unit of ASPC-Safford.

The GCDHHS listed 365 new COVID-19 cases on Friday, with 309 coming from local state and federal correctional facilities accrued since Dec. 28, 2020, according to the release. An additional 34 cases were from Safford, 10 from Thatcher, seven from the San Carlos Apache Tribe, and five from Pima.

Previous Safford zip code positive tests were affected by an increase from the Federal Correctional Institute-Safford, which had been releasing its totals on a daily basis. The new batch released at once that was accrued since Dec. 28 was explicitly from the local state prisons, which was not previously counted in Safford’s total.

According to the Arizona Department of Corrections, Rehabilitation and Reentry COVID-19 data dashboard, the Arizona State Prison Complex – Safford has 311 confirmed COVID-19 cases, with 135 inmates recovered as of Friday. Additionally, the Federal Corrections Institute – Safford lists 297 currently active COVID-19 prisoners, with 324 recovered. FCI -Safford also lists 21 staff members as actively positive and three recovered, as of Friday morning. The Bureau of Prisons (BOP) updates the numbers each weekday at 3 p.m., so Friday’s total could likely change.

The ADOCRR and BOP runs its own vaccination for prisoners and employees, however, the GCDHHS has vaccinated the healthcare workers at the state prison sites.

Arizona has been reported as the hotspot of the world for new COVID-19 cases, and Graham County is in the upper portion of counties with the most cases per population. According to the Arizona Department of Health Services’ COVID-19 Data Dashboard, Graham County was listed as having a percentage of 10,307 cases per 100,000 residents. Even with the most recent influx of cases in correctional facilities, however, Graham County is still behind Yuma County (13,205 per 100,000),  Santa Cruz County (12,240 per 100,000), Apache County (11,306 per 100,000), and Navajo County (10,850 per 100,000) in the rate of transmission per population. Conversely, Greenlee County – where there is no correctional facilities – has the lowest rate in Arizona with 4,347 per 100,000, according to Friday’s numbers from the ADHS.

As of Thursday, the Greenlee County Health Department has administered 3,984 tests, with 3,528 negative results, and 456 positive results.

On Friday, the ADHS listed 11,658 new cases to bring its total for the pandemic to 596,251 in Arizona. The department also listed 197 new deaths on Friday, to bring the total for Arizona to 9,938 dead attributed to COVID-19.