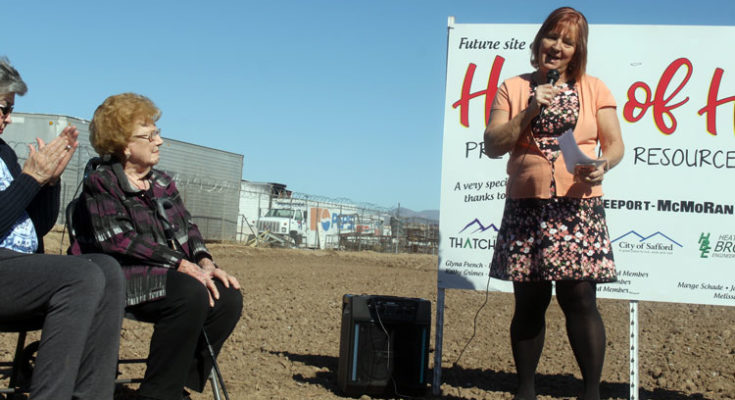 Jon Johnson File Photo/Gila Herald: GCSAC Director Kathy Grimes, right, speaks about how her meeting with Marge Schade, seated, led to the formation of the House of Hope Prevention & Resource Center during its dedication. The Coalition was awarded a $250,000 grant on Thursday.

PHOENIX – The Graham County Substance Abuse Coalition has been awarded a $250,000 grant from the Arizona Attorney General’s Office.

On Thursday, outgoing Attorney General Mark Brnovich, on one of his last acts in office, announced more than $2.2 million in grant funding had been awarded to organizations that serve people in rural Arizona counties. The funding will be used to battle the effects of opioid abuse, according to a news release from the Attorney General’s office.

“We are appreciative and excited to accept the Abatement Grant from the Arizona Attorney’s General’s Office,” said Kathy Grimes, Director of the Graham County Substance Abuse Coalition. “Living in a rural community and attempting to locate resources for community members or loved ones who are suffering from opioid addictions can be a challenge, if not impossible. This funding will allow us to provide resources and programs to assist individuals seeking recovery while also providing needed resources to further enhance individuals who are active in their recovery.”

The Graham County Substance Abuse Coalition began in 2003 as a cross-system substance abuse coalition with five members to address methamphetamine. It is now a non-profit organization with a board of directors.

Its mission is to provide resources, support, and education through prevention and intervention methods to reduce substance abuse with a primary focus on reducing and preventing youth substance use.