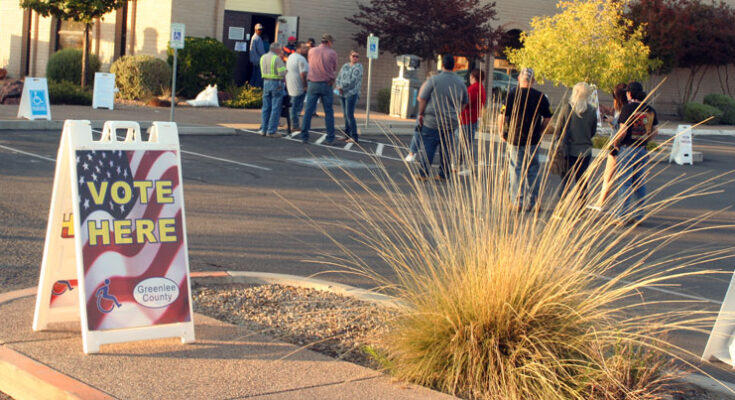 Walt Mares Photo/Gila Herald: Voters were lined up to cast their ballots on Election Day, Nov. 3 at the Morenci Club. This is only part of a longer line that formed as workers at the Morenci copper mine were getting off from or before going on to their work shifts.

GRAHAM AND GREENLEE COUNTIES – The following are election results for contested races concerning Graham and Greenlee counties. The results will be updated when possible if not already called.

As of Tuesday night, Graham County had a voter turnout of 71% and 63% for Greenlee County.

While the overall election is too close to call, the Gila Herald has called Arizona for Joe Biden, flipping the state from red to blue.

With the unprecedented early vote and 99% of precincts reporting, Biden has a lead over Trump, 51 percent to 47.63 percent.

The Gila Herald has called this election for Kelly.

Kelly leads McSally by about 52.6 percent to 47.4 percent with roughly 99% of the precincts reporting. The win turns Arizona into a blue state with both of its senators being from the Democratic Party and marks the second consecutive senate race that McSally has lost to her Democratic challenger.

The Gila Herald has called this election for O’Halleran.

O’Halleran has a lead of about 14,000 votes with most of the votes in the district counted.

The Gila Herald has called this election for incumbent Gowan.

Leading by about 60 percent to 40 percent, Gowan will retain his seat.

The Gila Herald has called this election for Griffin and Nutt.

With roughly 75% of the vote in, the Gila Herald has called Proposition 207 as passing with currently 60 percent yes to 40 percent no.

The proposition legalizes the possession and use of marijuana for adults (21 and older) who will be permitted to grow no more than six plants in their residences, as long as the plants are within a lockable enclosed area and beyond public view.

The proposition places a 16% tax on marijuana sales in addition to the existing transaction privilege tax and use tax. Revenue from the new tax will be divided between community college districts; municipal police, sheriff, and fire departments; fire districts; the state’s Highway User Revenue Fund, and a new Justice Reinvestment Fund.

With 97% of the precincts reporting, the proposition is passing by a margin of 53% to 47%.

The ballot initiative will enact a 3.5% income tax in addition to the existing income tax to single filers with a taxable income above $250,000 and joint filers with a taxable income above $500,000. The tax revenue is slated to be distributed with 85% going to school districts, 12% to the Career Training and Workforce Fund, and the remaining 3% to the Arizona Teachers Academy Fund.

Republican Danny Smith versus Democrat Nicholas Nordgran-Tellez – The Gila Herald has called the election for Danny Smith to retain his seat.

The hotly contested Thatcher School Board race has at least two extremely likely winners, with the third spot still possibly up in the air at this time.

The Safford Unified School District will have to wait another day to find out if its budget override has passed or failed.

Duderstadt said they would likely finish counting the provisional ballots on Thursday.

The Thatcher School bond has been voted down, losing at this point by an unsurmountable 1,521 votes for to 1,970 votes against.

The Gila Herald has called this election for Gomez, who leads with 324 votes, followed by Horn with 202 and Brinkley with 107.

Republican Suzanne Menges versus Independent Richard Lunt – With 100% of precincts in, the Gila Herald has called the election for Lunt with 611 votes to 442 for challenger Menges.

As of the update, Sumner has 1,049 votes compared to 1,017 for Ellison. Two other challengers include Democrat Larry Avila with 718 votes and Independent Jaime Aguilar with 260. The Greenlee County Election Department has finished verifying signatures on early and provisional ballots and will finish the count Thursday. According to Greenlee County Manager Derek Rapier, there are still 621 early/late ballots to be counted Thursday as well as a number of provisional ballots. They are called early/late ballots because they are ballots that were cast prior to the election but either arrived in the mail after the initial early vote counts or were dropped off at election vote centers on the day of the election. Provisional ballots are those that had some issues, such as a forgotten ID or bad signature, and had to be verified before counting.

Independent Joann “JoJo” Cathcart versus Independent Doug Reed – With the early votes in and 75 percent of the precincts, Cathcart leads with 1,735 to 841 for Reed. The Gila Herald has called this election for Cathcart.