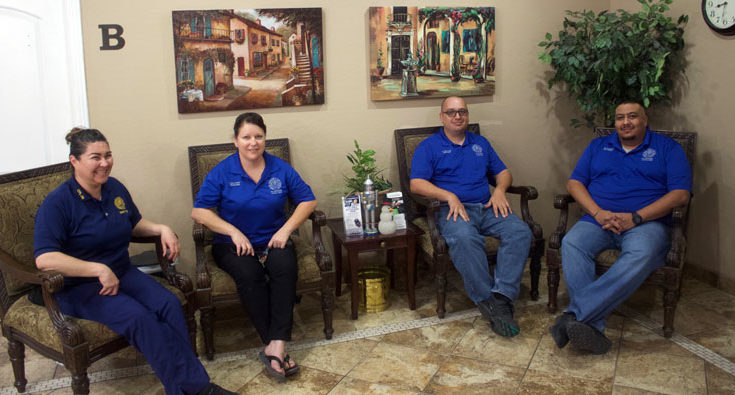 “We’re being used as pawns in this game.”

GRAHAM COUNTY – The squabbles between political parties in Washington D.C. may seem like they are far away but the ineffectiveness of those voted to represent the general public is having a dire effect on many in Graham County.

Nationwide, more than 800,000 federal workers are currently not getting paid as the partial government shutdown has now extended into its 18th day. Out of those, roughly 420,000 still must go to work as they are considered “essential” employees, such as the case of prison employees who are working and not getting paid while the inmates they guard, ironically, are still being paid their usual wages for jobs they perform.

As the majority of local federal workers are paycheck to paycheck, direct deposit to direct deposit, suddenly not having any money coming in from a job they still must work is forcing many to decide on which bills to pay and how to feed their families.

The American Federation of Government Employees Council of Prison Locals 33 is the union that covers the Federal Correctional Institution – Safford. In addition to the Bureau of Prisons, the AFGE also covers the Border Patrol, the Transportation Security Administration, U.S. Forest Service, Bureau of Land Management, Veterans Administration, etc.

On Monday, AFGECPL 33 members Dustin Truelove, president, Michael Espinoza, vice-president, Beth Holloway, treasurer, and Ynetta Villalba, secretary, spoke with the Gila Herald regarding how the government shutdown is affecting its members. While the group all works at FCI-Safford, they spoke on behalf of their union and not for the correctional facility itself.

Locally, about 200 prison employees are affected by the closure. That number grows when one takes in the other various federal government agency workers who are also in the area.

“We’re being used as pawns in this game,” Truelove said. “A lot of our staff are dealing with some very hard situations right now . . . Do I pay for this child care thing where my kid is right now or do I pull them from that (and) lose their spot and then, hopefully, be able to get them back later? This political game is affecting our employees’ daily lives. It’s going to get to a point, possibly, where many won’t be able to pay for gas to get to work anymore.”

Espinoza added that while they are not being paid, they still need to work a job that is inherently dangerous.

“We know everyday when we walk through those gates that we may not make it out of those gates, and now we’re being forced to come into this environment knowing that we’re not even getting paid for this.”

The government entered a partial shutdown after President Donald J. Trump refused to sign a short-term spending bill passed by the Republican-controlled Senate because it did not include roughly $5 billion he is seeking to start building a wall along the souther border with Mexico, which was a cornerstone of his election campaign. The $5 billion would only fund a portion of the wall, which could cost between $22 to $36 billion to cover the entire southern border.

The now Democratic-controlled House of Representatives is attempting to lure House Republicans to cross the aisle with bills to reopen the shuttered parts of the government and would need 55 Republican defections to override a presidential veto. While the House cannot force the Senate to vote on its bills, the veto-proof bills would be significant. The bills single out funding for separate government financial agencies, including the Internal Revenue Service. Democrats have agreed to spend upward of $1.6 billion on border security, but haven’t budged on funding more for the wall President Trump would like to build.

With local federal workers not being paid, the issue trickles down to other areas locally as the money the workers would be spending on bills and other local spending stops. While the federal employees aren’t getting paid animosity grows as the members of Congress are still cashing their own checks.

“Quit playing a game and get us paid,” Holloway said. “We don’t care what you represent. We don’t care if you are Democrat or Republican, we just want them to do their jobs. They were elected for that reason, to pass a budget.”

“I have a hard time with the fact that our president still allows the public to come and visit inmates right now but they can’t even get into a national park right now,” Truelove said.

In that vein, the shutdown is costing the federal government lost revenues as well. During a 16-day government shutdown in 2013 over the fight regarding the Affordable Care Act under President Barack Obama, that shutdown cost the government billions of dollars and shaved off $2 billion to $6 billion off the fourth-quarter GDP growth that year from federal employees who weren’t getting paid not spending money they didn’t have.  Some of those losses were made up during 2014 after federal workers received retroactive pay, but that pay must be signed off by the president and retroactive pay is not a given.

As the shutdown continues, other aspects may fall by the wayside, including welfare programs such as food stamps, M, and others.

“There’s a lot of people who are affected by this that don’t even realize they are affected yet,” Truelove said.

The prison workers who spoke with the Gila Herald have lived through shutdowns before, but they said this time feels different.

“It just seems like there’s no light at the end of the tunnel,” Truelove said.

“The ones I’ve been through have been stressful,” Holloway said. “This one feels worse because it seems the president doesn’t want to end it.”

City of Safford looks to help

While the federal government is having trouble passing a budget and getting its employees paid, Safford Mayor Jason Kouts is looking to help out those employees who live within the city’s utility area to postpone their bills until the workers are paid. Kouts took the idea to City Manager Horatio Skeete, who told the Gila Herald that a proposal will be taken to the City Council at its Jan. 14 meeting to provide some relief for the local federal government workers.

“We feel their burden and want to do everything we can as a city to help out any way we can,” Kouts said. “I’m very disappointed that small, local government has to be the one to step in and kind of show the big government how it’s done. We work together down here. We don’t see red or blue, we work together and make it happen.”

Espinoza encouraged the general public to let their representatives know that they won’t stand for this shutdown to continue.

“They need to start putting the pressure on Washington, letting them know that we’re not going to put up with this and they need to pass this budget and end the shutdown because it’s really going to a our whole community,” Espinoza said.