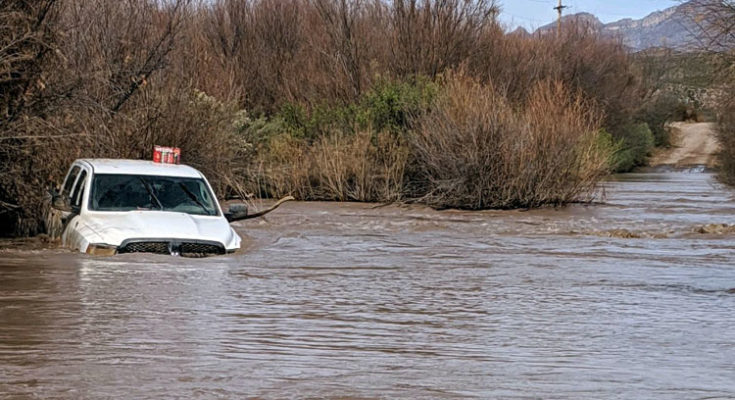 Deputies rescue woman from Jeep stuck in the Gila River

GRAHAM COUNTY – Shortly after 12:30 a.m., on Tuesday, deputies were dispatched to the northern end of the 8th Avenue Bridge regarding a man on the bridge wearing only underwear. The man then relayed to the reporting party that his girlfriend was trapped in a Jeep stuck in the Gila River.

The driver allegedly told deputies that he attempted to cross the river believing it to be shallow enough but got stuck and water came into the cabin area. The man managed to extradite himself from the Jeep and out of the water, but his girlfriend and his dog were still in the vehicle.

Two deputies then assisted the woman out of the Jeep and out of the river. One deputy then went back for the man’s dog.

After the woman and canine were safely removed from the river, the driver asked if the deputies could help him pull his Jeep out of the water. When the man was advised that it was against department policy and they could recommend a tow company the man reportedly became upset and yelled at the deputies. He then said he would remove the vehicle later with the help of some friends.

The male driver, female passenger, and their dog were all transported by a deputy to their residence in Safford.