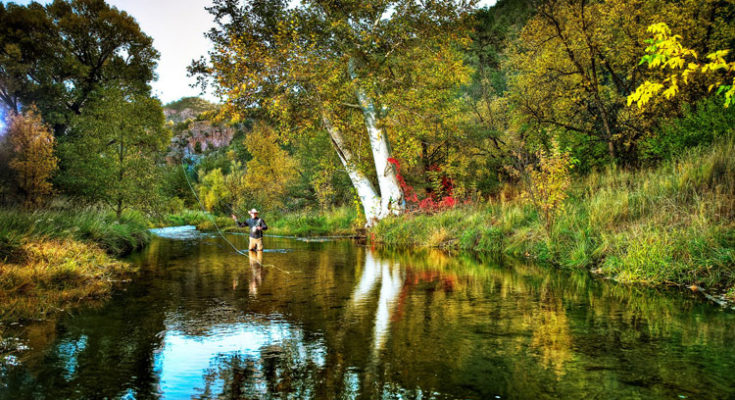 Photo By Wick Beavers: The Gila River was named the most endangered river in the United States by American Rivers.

Editor’s Note: Safford’s main source of water is from Bonita Creek, which is fed into the Gila River, which has its headwaters in New Mexico.

“We are already feeling the impacts of climate change in New Mexico and across the Southwest, and it’s only going to get worse. The decisions we make today will determine whether we have healthy rivers and secure water supplies in the future. We have an opportunity on the Gila to demonstrate that it is possible to protect healthy rivers and meet our water needs in an era of climate change.”

American Rivers and its partners called on New Mexico Governor Lujan Grisham to stop the diversion project and instead spend $66 million available through Arizona Water Settlement Act (AWSA) funding on alternative water supply solutions to meet the water needs of communities throughout southwest New Mexico. These solutions include infrastructure improvements and expansions such as the Grant County Regional Water Supply Project and municipal and agricultural conservation and efficiency projects.

“It’s time to stop the waste of millions in federal funds on a Gila River diversion to benefit a small number of irrigators and the world’s largest copper mining company, and instead direct AWSA monies to critically important community water projects that achieve long-term water security for thousands in southwest New Mexico,” stated Allyson Siwik, Executive Director of the Gila Conservation Coalition.

“It’s rare to see a wild river these days because so many of the nation’s rivers have been dammed,” said Donna Stevens, Executive Director of the Upper Gila Watershed Alliance. “People come from all over to visit the Gila Wilderness – the nation’s first wilderness area – and the Gila River. They boost the local economy with their tourist dollars.”

Flowing out of the nation’s first Wilderness Area, the Gila River supports outstanding examples of Southwest riparian forest, cold-water fisheries and a remarkable abundance of wildlife. The river is home to indigenous people who have lived in southwestern New Mexico for thousands of years and remains vital to the region’s culture and heritage.

“A stronghold for many endangered species, the Gila is one of the last intact rivers left in North America. We have to work hard to make sure it stays that way. We urge Governor Lujan Grisham to help us protect the Gila River forever,” said Todd Schulke, co-founder and Senior Staff with the Center for Biological Diversity.

The annual America’s Most Endangered Rivers® report is a list of rivers at a crossroads, where key decisions in the coming months will determine the rivers’ fates. Over the years, the report has helped spur many successes including the removal of outdated dams, the protection of rivers with Wild and Scenic designations, and the prevention of harmful development and pollution.

America’s Most Endangered Rivers® of 2019

#4 Green-Duwamish River, Washington Local leaders must produce a flood protection plan that safeguards communities and restores habitat for chinook salmon — fish that are essential to the diet of Puget Sound’s endangered orca whales.

#5 Willamette River, Oregon The U.S. Army Corps of Engineers must immediately improve 13 dams to save wild chinook salmon and steelhead from going extinct.

#6 Chilkat River, Alaska The Japanese investment firm, DOWA, must do the responsible thing and back out of a mining project that could decimate native salmon.

#7 South Fork Salmon River, Idaho The U.S. Forest Service must safeguard endangered fish by denying a mining proposal that could pollute this tributary of the Wild and Scenic Salmon River.

#10 Stikine River, Alaska The International Joint Commission of the United States and Canada must protect the river’s clean water, fish and wildlife, and indigenous communities by stopping harmful, polluting mines.

2019’s “River of the Year”: Cuyahoga River, Ohio American Rivers celebrates the progress Cleveland has made in cleaning up the Cuyahoga River, fifty years since the river’s famous fire that sparked the nation’s environmental movement.

American Rivers believes every community in our country should have clean water and a healthy river. Since 1973, we have been protecting wild rivers, restoring damaged rivers and conserving clean water for people and nature. With headquarters in Washington, D.C., and offices across the country, we are the most effective river conservation organization in the United States, delivering solutions that will last for generations to come. Connect with us at AmericanRivers.org.