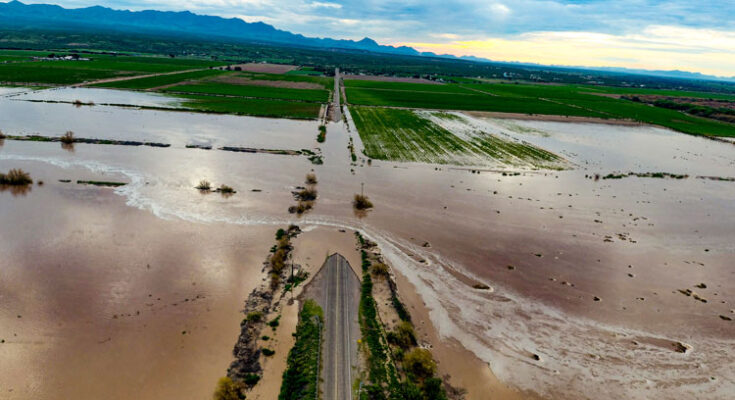 Jon Johnson Photo/Gila Herald: The Gila River has flooded cotton fields in Eden and caused the closure of Bryce/Eden Road just east of the Eden Bridge.

One farmer says 80 acres of cotton under water

EDEN – The Gila River deluge that flooded Duncan on Monday and crested in the Solomon area on Tuesday has flooded farmland in Eden overnight.

Water from the Gila River apparently broke through a levee and flooded cotton fields and closed Bryce/Eden Road just east of the Eden Bridge.

According to the United States Geological Survey (USGS), the river had reached a height of 22.35 feet at the Gila River at Head of Safford Valley near Solomon monitoring at 1:55 a.m. on Tuesday, Aug. 23. As of 8:30 a.m. Wednesday, the station showed the height at 18 feet.

That station is more than 15 miles from the affected Eden area, however, and the influx of extra water continues to move downstream. The water crested the southern approach to the Pima Bridge at around 7 p.m. on Tuesday and crossed the road there briefly.

Clint Colvin, of Colvin Farms in Eden, said he believes he has about 80 acres of cotton underwater. The flooding could possibly damage the cotton plants with overwatering, causing rot and/or for the cotton to drop off to the ground.

Farmers in the area are not likely to have flood insurance due to such occurrences only happening about once every 10 years. However, if the crop has been destroyed they can appeal for insurance and other assistance, according to Colvin.

While the levee system was reportedly designed to hold a much stronger surge, the water speed was estimated at a maximum of 21,000 ft3/2. Colvin suggested a gopher hole may have been a starting point for the water to begin a tunnel.

Another reason for the logjam of water could be congestion from the tamarisk plant. Tamarisk is an invasive shrub or small tree that is found across the American West. Also known as salt cedar, tamarisk favors sites that are inhospitable to native streamside plants because of high salinity and low water availability. Unlike the taller cottonwoods that used to permeate the area and would allow water to pass through, tamarisk clogs up the flow.

Northern tamarisk beetles (Diorhabda carinulata) were released in the Upper Colorado River Basin in the United States from 2004–2007 to defoliate previously introduced tamarisk shrubs, according to the USGS. The beetles have made their way down to the lower basin areas.

Colvin also farms hemp in the area and has a cannabis grow operation as well. While the water came up to the exterior walls of the grow operation, that site was built to 1983 flood-level standards and has remained dry, according to Colvin.