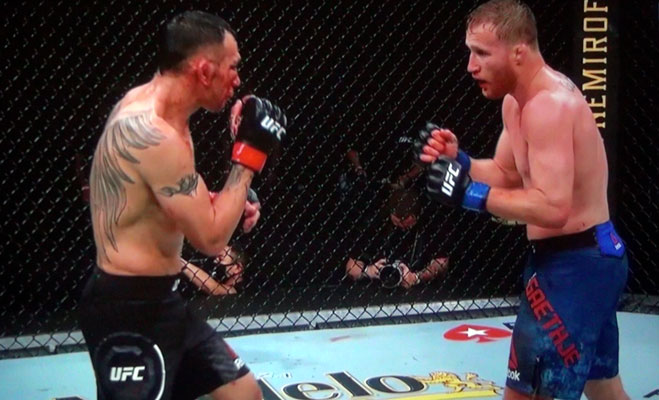 JACKSONVILLE, FLORIDA – The early morning runs, two-a-day workouts, a strict diet, and a lifetime of preparation led to this, the moment in which Justin “The Highlight” Gaethje (22-2) grabbed the opportunity with both hands Saturday night at UFC 249 and became the champion he is.

The immovable object collided with an unprecedented nearly 8-year, 12-fight win streak held by Tony “El Cucuy” Ferguson (25-4), who was ranked as the No. 1 Lightweight contender in the UFC. Gaethje systematically brutally punished Ferguson until the fight was called for a TKO at 3:39 in the fifth round.

No. 4-ranked Gaethje has now leapfrogged Ferguson and has earned the title of Interim Lightweight Champion. While he will be celebrating his victory, Gaethje set his eyes on the undisputed Lightweight Championship Belt, and to get that will have to go through unbeaten Khabib Nurmagomedov. A fight that UFC President Dana White has promised to the victor.

After the fight, Gaethje was awarded the Interim Lightweight belt and he tossed it aside. Commentator Joe Rogan asked him why he did that and Gaethje calmly replied, “I’ll wait for the real one” calling out Nurmagomedov, who Tweeted, “No comment.”

The fight was the best technical fight of Gaethje’s career and punished Ferguson as no other had ever done before. Fighting on short notice, Gaethje kept his conditioning throughout, didn’t try to go for the killer strike when he hurt Ferguson, and simply put on a clinic in how to beat the bogeyman.

"I'll wait for the real one." pic.twitter.com/GBxD1RUemj

In the fifth and deciding round, Gaethje was in total control, shoving Ferguson into the cage and landing punishing right and left hooks while attacking the legs with crippling kicks. One had to hand it to Ferguson, however, as he somehow remained upright through it all, until the fight was called. Now, Gaethje turns his attention to Nuragomedov.

“Khabib is the best in the world,” Gaethje said. “I’ve been working since I was 4 for challenges like this. I’m happy to represent the United States of America against Dagestan or Russia’s best. He’s 28-0 and there’s no other challenge I want right now. I want to fight him.”

For Gaethje, the journey to being a champion began at the age of 4, when he started his wrestling journey. While he participated in other sports while attending Safford schools, Gaethje excelled in wrestling and was a four-time state finalist and two-time state champion.

That wrestling prowess led him to the University of Northern Colorado, where he became the school’s only All-American.

Introduced to MMA while still in college, Gaethje amassed an impressive 7-0 amateur record. He then defeated Kevin Croom on Aug. 20, 2011, for his first professional victory when he knocked Croom out with a body slam after Croom attempted a submission. You do not submit Gaethje.

He was signed by the World Series of Fighting on Jan. 22, 2013, and quickly rose through the ranks to become its inaugural Lightweight Champion when he beat Richard Patishnock by TKO in the first round. Gaethje would win six more fights in the WSOF after becoming champion, with five of those being title defenses – one was deemed not a title match due to his opponent not making weight.

Then, on May 4, 2017, Gaethje vacated his WSOF title and signed with the UFC. After beating Michael Johnson, Gaethje had back-to-back losses against Eddie Alvarez and Dustin Poirier. Instead of being down-and-out, Gaethje came back even stronger and dispatched his next three challenges all in the first round; knocking out James Vick, Edson Barboza, and Donald Cerrone.

Gaethje said the losses to Alvarez and Poirier led him to become a better fighter.

“I have a world-class coach,” Gaethje said. “I had to lose to change. You can’t fix what’s not broken. Once I understood what was wrong – I was getting hit too much. I was honestly having too much fun. Both times I lost I became complacent because I was having so much fun. And at this level, you absolutely cannot do that.”

The win against Ferguson gave Gaethje his fourth consecutive win by knockout or TKO.

Those impressive wins led White to look toward Gaethje when a replacement for Lightweight Champion Khabib Nurmagomedov, who bowed out of his previously scheduled UFC 249 matchup with Ferguson due to the COVID-19 pandemic and his inability to leave Russia. Now, the matchup will be Gaethje versus Nurmagomedov for the undisputed Lightweight Champion Belt, and a new title is again within reach for the highlight from Safford.