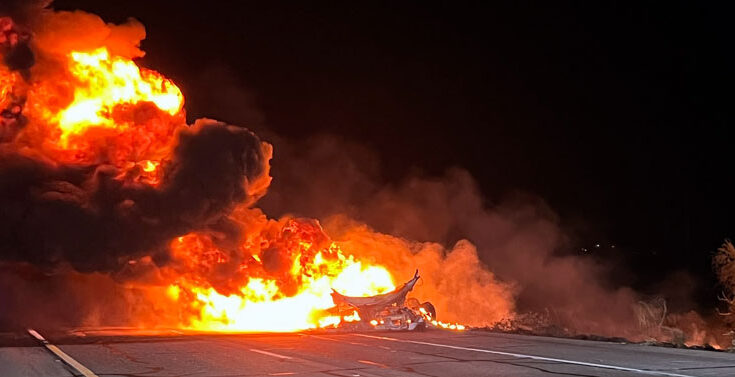 Photo By Clark Bingham/SFD: A tanker truck is fully engulfed in flames after exploding late Thursday night along U.S. Highway 191 south of Safford.

GRAHAM COUNTY – A fuel haul truck driver experienced what could be a scene out of a Fast and Furious movie late Thursday night when his tanker truck caught fire and exploded.

According to Graham County Dispatch notes, a tractor-trailer hauling diesel and unleaded fuel for a local gas station caught fire and exploded late Thursday night on U.S. Highway 191, near milepost 97, south of Safford.

The area is roughly five miles north of the border with Cochise County.

First responders were dispatched to the area at about 11:57 p.m., and the Safford Fire Department arrived to find the tanker’s fuel fully enflamed.

According to Safford Fire Chief Clark Bingham, the driver advised he was headed down the highway when he noticed flames coming from the rear tires of the trailer. The driver stopped and utilized his fire extinguisher, but the fire continued to spread and once the fire extinguisher ran out so did the driver.

After the driver had exited a safe distance and notified 911, the tanker heated to a point to which the vapors inside blew off the top of the tank and erupted in a fountain of burning fuel.

That was the scene when Safford firefighters arrived. At that point, the strategy is to contain the fire to the tanker and let the fuel burn itself out. Firefighters then finished off the blaze with a heavy dose of foam before turning the scene over to a HAZMAT team out of Casa Grande. The Thatcher Fire Department assisted with their water tanker as well.

The incident closed the highway for an extended period of time due to the fire and subsequent debris removal. There were no injuries listed for the fuel truck driver or first responders.