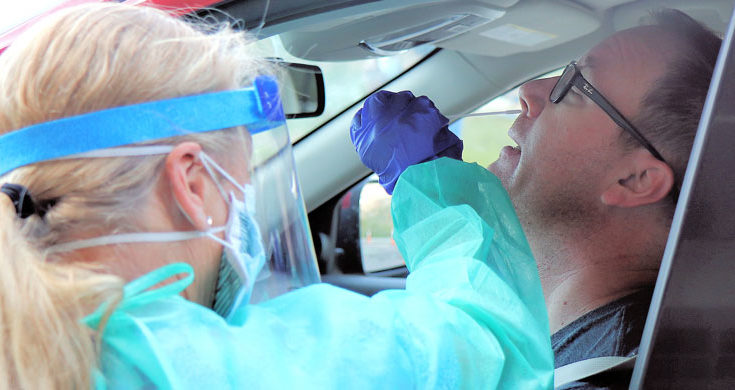 Raymundo Frasquillo Photo/Gila Herald: Morenci resident Jason Palmer tilts his head back to await the insertion of a nasopharyngeal swab. Greenlee County Health Department nurse Janice Lovett – one of six nurses on hand – administered the Covid-19 virus test. A total of 98 tests were administered in Morenci July 25 and results were available within a few days.

MORENCI – Two weeks ago, 30 seconds of one’s life was all that was needed to take a Polymerase Chain Reaction (PCR) COVID-19 test in Morenci. The PCR test is a diagnostic test that determines if you are infected by analyzing a sample to see if it contains genetic material from the Covid-19 virus.

The total time it took from entering to exiting the Gila Health Clinic campus was around 12 minutes. It was a free of charge drive-through test given on July 25.

Thirty-eight volunteers, half of them visible at the different stations encountered, were on hand for the four-hour Saturday morning community service.

Participants were told not to contact the clinic for results before 10 days. Returned results came back as either negative (normal) or positive, and each participant has long ago been notified by phone or mail. As of Friday, Greenlee County has listed a total of 58 positive test results for the course of the pandemic.

A courier picked up 94 tests and those results were available the following Monday. The remaining four were sent another day with results available Tuesday. Clearly, results for all 98 tests were known before the mentioned 10 days. The reason given for the time length was that tests are sometimes sent to New Jersey, a site the same lab has, but all of the days’ tests in Morenci were sent to their facility in Arizona.

Aside from the two-lane entrance and single lane exit, a station issuing forms, one collecting filled out forms, a standby station, the testing station, and a mask give away station were in place.

Forms on clipboards along with pens were handed out at the registration site by Dani Maxwell-Diaz and Brandy McCormick, and numbers were written on vehicle windshields to identify participants. The pair of Gila Health Clinic employees discarded protective gloves with each vehicle served.

Jenni Burke and Lupita Mesa collected the forms and clipboards at the next stop, also changing gloves with each vehicle.

Clad in protective gowns, masks along with facial shields, and gloves, six nurses rotated administering tests. Participants tilted their heads back, had a nasopharyngeal swab inserted through a nostril until it reached the throat, and awaited 30 seconds before it was pulled out. Nurses discarded not only gloves but protective gowns as well after each vehicle.

Five volunteers manned the reusable brown-bagged mask give away station, and one person was at the exit station. The other 18 volunteers ran filled out forms indoors, typed in collected data, took in administered tests, delivered bottled water to others working outdoors, and helped out where they were needed.

Two law enforcement officers were on hand if needed, Chance Campbell of the Freeport McMoRan Mine Security and Sergeant Daniel Medina of the Greenlee County Sheriff’s Office.

The planning process was obviously thorough as the time involved for participants was minimal, leaving one’s vehicle was not required, and results were available within a short period of time.

An explanation of testing expectations, what to do if symptoms are in place and if no symptoms or close contact with a known case, was handed out. The sheet also contained information on mask usage.

A total of 11,355 fabric face masks, made by area volunteers, have been handed out since early April in response to keeping the community safe during the current global health crisis.

We study history so as not to repeat the same mistakes of the past. One of the lessons learned following the early 20th Century global health crisis was facial coverings work in slowing the spread.

The Gila Health Clinic has available PCR tests for a fee, but the cost depends on individual health coverage plans. The clinic is open Monday through Friday and can be reached at (928) 865-9801.