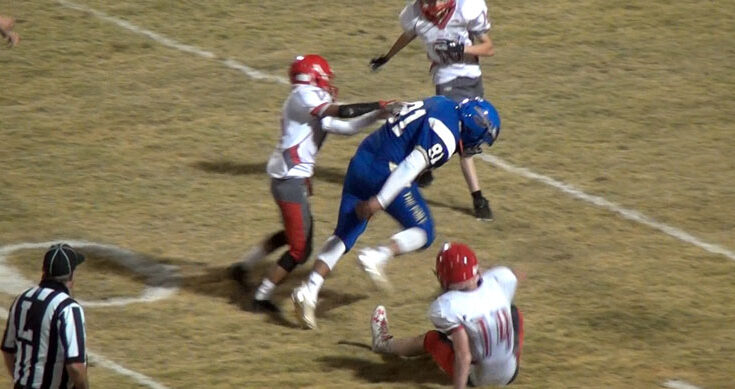 Jon Johnson Photo/Gila Herald: Terrold Robertson dispatches a defender on his way to a big gain against Duncan last Friday night. The Apaches’ season has ended due to a number of athletes were quarantined for COVID-19 resulting in the cancelation of the team’s final two games.

FORT THOMAS – After getting their first win of the season, the Fort Thomas Apaches (1-1 region, 1-3 overall) were looking forward to at least one last home game. However, due to an outbreak of COVID-19 among the athletes, that is not to be.

The Apaches canceled their last two football games, Friday at home against the Valley Union Blue Devils, and Friday, Nov. 6 at the St. David Tigers. With only one win on the season, the cancelations mean Fort Thomas’ football season is over.

The season was already shortened to just six games due to the COVID-19 pandemic, and after the win over Duncan last Friday, head coach Bracken Walker commented on being able to be on the field.

“It’s good for the kids to be able to get out of the house and be here and compete and get some physical activity,” Walker said.

However, after multiple football and volleyball players were quarantined due to the virus, that has come to an end.

With a small squad to begin with, Fort Thomas could not handle multiple players not being available to play.

A number of volleyball players were also quarantined for COVID-19, prompting the cancelation of the team’s final seven matches.

The volleyball team was scheduled to play Valley Union on Thursday, Globe on Friday, Willcox on Nov. 2, Tombstone on Nov. 3, and St. David on Nov. 5. Two previous matches against Immaculate Heart (Oct. 27) and Patagonia (Oct. 28) had already been canceled due to COVID-19 issues at those schools.

Editor’s Note: This article was corrected at 12:15 p.m. to reflect the players being quarantined rather than testing positive for COVID-19.