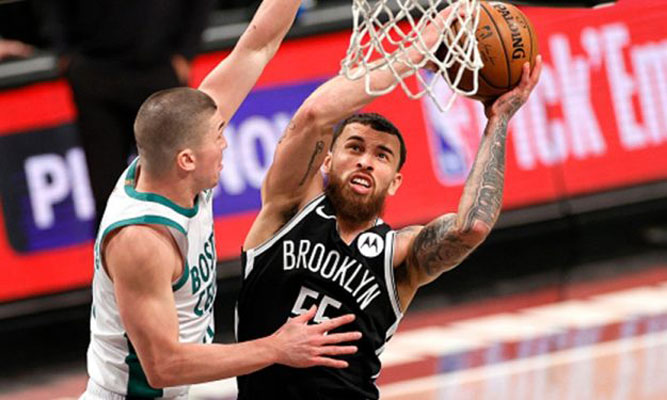 Former EAC Gila Monster Mike James goes for a bucket against the Boston Celtics in his debut. On Monday, the Brooklyn Nets inked James to a second, 10-day contract.

BROOKLYN – Showing some of the silky sleek moves well known to the Gila Valley from his years at Eastern Arizona College, former Gila Monster standout Mike James has impressed the Brooklyn Nets enough to earn a second 10-day contract. But will the team keep him for the playoffs?

James, 30, starred at EAC during the 2008-10 seasons. After leading EAC, he transferred to Lamar University, where he averaged 15.1 points and as a senior in 2012 was named First Team All-Southland Conference and was the conference tournament’s MVP.

On Monday, the Nets signed James to a second, 10-day contract, which will cover five games and will run until May 13, which leaves just two games left in the regular season. If Brooklyn wants to keep James for use in its upcoming playoff run – the team has clinched a playoff spot and is in a battle with the Philadelphia 76ers for the top-seed in the Eastern Conference – the Nets will have to convert his contract to a standard deal before the end of the season.

The Nets signed the seasoned James at a time when its roster has been depleted by injuries. Former ASU standout and NBA All-Star James Harden was out, along with Chris Chiozza, Spencer Dinwiddie, and Tyler Johnson. So far, only Johnson has returned although Harden is expected back for the playoffs.

James’ first foray into the league came in the 2017-18 season when he played 36 games for the Phoenix Suns and New Orleans Pelicans. During that time, he recorded averages of 9.3 points, 2.5 rebounds, and 3.5 assists, according to the NBA.

He has also played professionally overseas the last nine years and was a EuroLeague scoring champion while leading Olimpia Milano in Italy to the Italian SuperCup title in the 2018-19 season. James also won consecutive Greek League titles in 2017 and 2018 and the Greek Cup in 2017 while with Panathinaikos B.C. in Athens, Greece.

Most recently, James spent two seasons with CSKA Moscow in Russia. After an altercation with its head coach in March, James was suspended from the Russian team, which allowed him to sign with the Nets. However, James is still under contract with CSKA might return to Moscow next season.

After his season premiere versus the Boston Celtics on April 23, James said he wasn’t sure if he wanted to leave playing overseas as an all-star to try the NBA again but in the end felt that it would be a nice change of scenery and pace.

“I didn’t really know if I wanted to play in the NBA again,” James said. “I was getting paid well, and I like playing a lot and having a star role and stuff. (But) just as you get older I just don’t want to have that much responsibility on my shoulders every night. Playing 21 minutes a night is better for me and not being as much as a focal point and just trying to help out.”

Help out indeed. The league is afire with the superb play of James, who went for 15 points in 24 minutes versus the Portland Trailblazers (his hometown team) on April 30. He then rewarded the Nets for signing him to a second, 10-day contract on Monday by scoring a point a minute against the Milwaukee Bucks and finished with 10. So far on the season, James is averaging 6.7 points in 16.1 minutes per game. For his NBA career, he is averaging 8.9 points in 18.6 minutes per game.

However, James is not just about scoring and has also handled the rock well, hit open teammates and has made the extra passes needed for easy buckets, and has played tough defense.