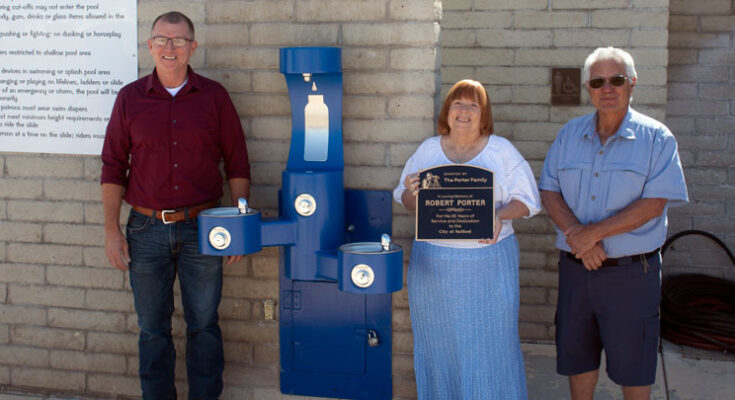 Jon Johnson Photo/Gila Herald: From left, Safford Public Works Director Lance Henrie, Joyce Porter, and Safford City Council member Arnold Ortega pose for a picture during a presentation Wednesday recognizing the Porter family’s donation of a drinking fountain/bottle filler in remembrance of former Public Works Director Robert Porter, who passed four years ago. Robert was in charge of making the new pool and was the first person to take a ride down its slides. ,

SAFFORD – Safford pool-goers will find refreshment from the heat this summer thanks to a donation of a drinking fountain/bottle filler from Joyce Porter.

Joyce made the donation in remembrance of her late husband, Robert Porter, who previously worked for the city for a number of years and served as its Public Works Director. Porter passed four years ago.

Joyce made the donation last year after asking current Public Works Director Lance Henrie what the city needed at the pool or park and informed Henrie of her late husband’s passion for the Safford Pool. Henrie said the city had been wanting to replace its old water fountains and broached the idea with Joyce.

The drinking fountain/bottle filler is handicapped accessible and comes with two separate drinking stations along with the bottle filler. The fountain cost roughly $5,300, all of which was donated by Joyce.

“I told her we would share the costs and she didn’t hesitate and wrote a check for the whole amount,” Henrie said.

On Wednesday morning, Henrie presented Joyce with a plaque that will be hung above the drinking fountain.

“We had this plaque made up in memory of Robert,” Henrie said. “We’re going to mount this plaque near the drinking fountain and have Public Works staff install it and then anybody who comes and drinks here will always remember this is donated by the Porter family.

Henrie said the initial donation was made last year during the ongoing pandemic and he wanted to hold the dedication before the pool season to give recognition to the Porter family for their kind donation.

Joyce said her late husband loved the Safford Pool and that it was a joy to be a part of its creation.

“Robert was pleased with the outcome of the pool,” Joyce Porter said. “He was in charge of upgrading it many years ago. So, I thought this was definitely a fitting place for a memorial.”

Robert Porter was the city’s Public Works Director when the new pool was constructed and was the first person to take a ride down its slide.

The Safford Pool will host some end-of-the-school-year parties next week and will officially open to the public on Friday, May 21.