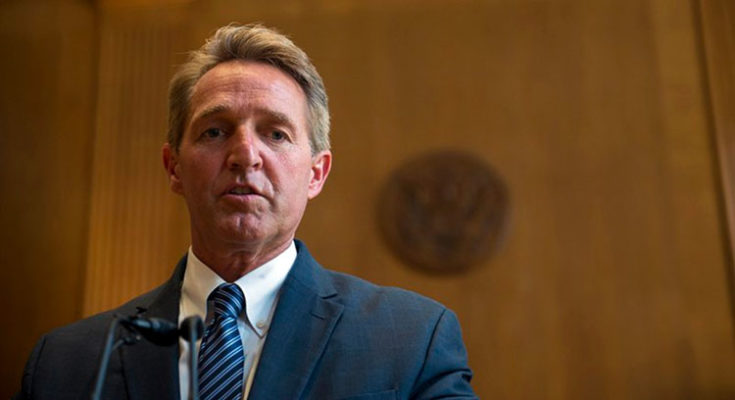 WASHINGTON D.C. – Arizona Sen. Jeff Flake provided a key vote Friday to advance Supreme Court nominee Brett Kavanaugh but warned that he will not give final approval until the FBI investigates sexual assault allegations against the nominee.

Flake’s vote gave Republicans the one-vote margin they needed in the Senate Judiciary Committee to give preliminary approval to the nomination and send it to the full Senate for approval.

But the Arizona Republican warned that he would have difficulty voting for Kavanaugh on the floor unless the FBI first has one week to investigate charges, aired before the committee Thursday, that Kavanaugh sexually assaulted Christine Blasey Ford when both were in high school.

Flake made clear that he cannot guarantee a delay in the final vote or that the FBI will investigate the allegations – those are decisions that will be made by Senate leadership. But without Flake’s vote on final passage, Kavanaugh’s nomination could go down to defeat, since Republicans have only a one-vote margin in the Senate.

“I do think we can have a short pause,” Flake said after the committee voted 11-10 along party lines to advance the nomination for now.

The call for an FBI investigation would delay what had been an expected vote by the full Senate as early as next week – when the current eight-member Supreme Court is set to begin its new term.

It came just hours after Flake announced plans to vote for Kavanaugh, even though he left Thursday’s daylong hearing “with as much doubt as certainty” about the allegations by Ford against Kavanaugh, who has repeatedly and categorically denied the allegations.

Flake said Friday morning that he ultimately decided to vote for Kavanaugh because “our system of justice affords a presumption of innocence to the accused, absent corroborating evidence.”

But that announcement was followed by hours of arguments in committee, with Democrats asking why the vote was being rushed and why it could not wait for a fuller investigation.

That appeared to sway Flake who, as in Thursday’s meeting, did not speak until he announced his conditional support for the nominee.

Friday’s developments follow several days in which Flake expressed misgivings about the charged nomination process. He had urged his colleagues to approach Thursday’s hearing with an open mind, without giving any indication as to his stand.

After four days of hearings earlier this month, Kavanaugh’s nomination to replace retiring Justice Anthony Kennedy appeared to be sailing toward approval until Ford’s allegations surfaced almost two weeks ago.

She said that Kavanaugh assaulted her at a party in 1982 when both were in high school in suburban Maryland. Ford said a drunken Kavanaugh pinned her to a bed, put his hand over her mouth and tried to remove her clothes before she was able to get away.

Since Ford’s name became public less than a week ago, two other women have come forward to say they, too, were assaulted by Kavanaugh when they were in high school or college with him.

Kavanaugh has categorically and repeatedly denied all the accusations, a defense he repeated in Thursday’s hearing before going on the offensive and accusing Democrats of an “orchestrated political hit” on him.

When Ford’s allegations became public, Democrats demanded a delay in the process until the FBI could investigate the allegations. But Senate Republicans said it was their job, not the FBI’s, to investigate. Committee staff conducted numerous interviews that led to Thursday’s hearing with just Kavanaugh and Ford testifying.

Flake had been one of the Republicans calling for more hearings earlier this month, saying in news reports shortly after Ford’s allegations were made public that he is “not comfortable voting yes” on the nomination until the Ford had a chance to tell her story.

“When Dr. Ford’s allegations against Judge Kavanaugh surfaced two weeks ago, I insisted that she be allowed to testify before the committee moved to a vote,” Flake said in a statement released by his office Friday.

“Yesterday, we heard compelling testimony from Dr. Ford, as well as a persuasive response from Judge Kavanaugh,” the statement said. “I wish I could express the confidence that some of my colleagues have conveyed about what either did or did not happen in the early 1980s.”

The committee fight over Kavanaugh has been highly partisan, with members accusing each other of rushing the vote or trying to smear the nominee. That continued Friday morning when Democrats briefly walked out of the hearing in which they were to vote on Kavanaugh.

Flake was the only senator who did not ask a question – or make a politically charged accusation toward senators across the aisle – at a daylong hearing in which Kavanaugh and Ford were the only witnesses.

“This is not a good process, but it’s all we’ve got,” Flake said late Thursday. “In the end, there is likely to be as much doubt as certainty going out of this room today.”

He was also one of the only senators not to speak Friday – until he announced his conditional vote.