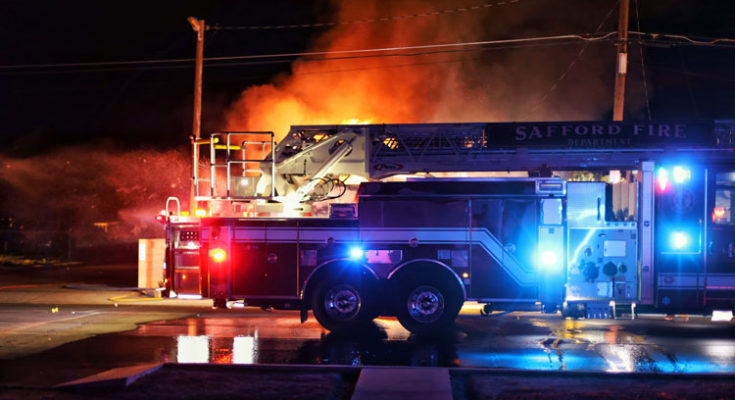 According to Safford Fire Chief Clark Bingham, the volunteer Safford Fire Department was dispatched at about 11 p.m. to 815 W. 10th Street regarding the fire. Upon arrival, the structure was fully engulfed with flames. Bingham said the family informed him the container that caught fire was a milk crate holding laundry, but family members later contacted the Gila Herald and advised that it was a laundry basket.

The residence’s occupants, an elderly woman and her grandson, reportedly got out of harm’s way with minimal injuries.

According to Bingham, the grandson attempted to remove the basket after he noticed it was on fire and suffered burns that were treated at the scene and did not require hospitalization.

The firefighters kept the blaze to the single property, which is next door to an apartment complex across from Safford Middle School. However, the home was a total loss.

The Safford Fire Department sent three trucks to the scene and worked until about 3 a.m. before their job for the night was complete.

“The guys did a good job,” Bingham said. “(They) had it knocked down pretty quickly once they arrived on scene.”

Facebook Live video by Jose Hernandez – Warning for some language –

This article was updated at 1 p.m. after a conversation with a family member. It was updated again at 2:44 p.m. with new photos.