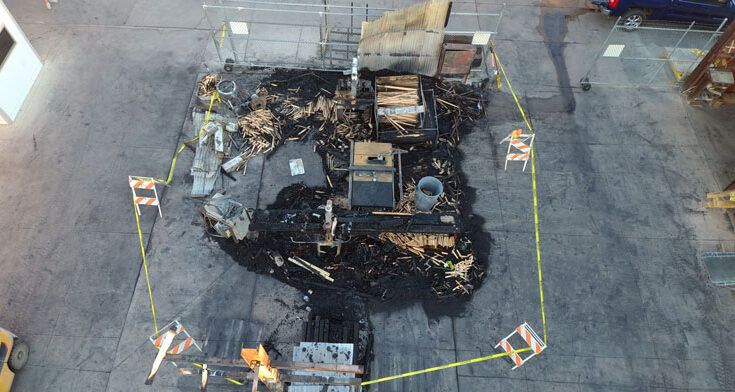 Jon Johnson Photo/Gila Herald: Caution tape surrounds a pile of burned wood and metal in the Safford Builders Supply/Ace Hardware lumber yard. A fire consumed various assets late Thursday night. The cause of the fire is under investigation.

SAFFORD – A fire damaged the lumber yard at Safford Builders Supply/Ace Hardware late Thursday night. While an amount of lumber and metal roofing supplies were destroyed, there were no injuries and the business was open bright and early Friday morning.

Safford Police and the Safford Fire Department were dispatched at about 10 p.m. To a report of a fire at the store at 707 S. 6th Ave. According to ACE owner Preston Owens, store surveillance footage shows the fire starting at about 10 p.m. With firefighters arriving just six minutes later to battle it.

“They made a good stop on it,” Owens said. “They were really quick.”

The fire consumed mostly siding, 1X12 lumber, stakes, and some metal roofing, according to Owens, who said the more valuable lumber assets were in warehouses or stacked in other units.

“We’re blessed that it didn’t take out the whole yard,” Owens said. “It could have been a lot worse. We’re glad that it’s just property damage.”

The Safford Builders family had already disposed of most of the severely burned pieces by the time the sun came up Friday morning and were hard at work getting the store ready to open to its loyal customers.

While there is video surveillance of the fire, the cause is still under investigation.