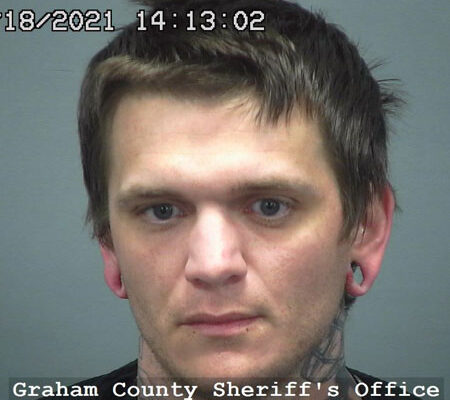 Contributed Photo/Courtesy GCSO: Randon Micah Ray, 30, pleaded guilty in Graham County Superior Court on Monday to four counts of conspiracy to commit the sale of a narcotic drug and was given a stipulated sentence of 15 years in prison.

SAFFORD – The reported kingpin of a fentanyl dealing group that had allegedly brought thousands of illicit pills into the Gila Valley was sentenced on Monday. All three men arrested in the ring have been given prison terms.

Randon Micah Ray, 30, plead guilty to four counts of conspiracy to commit the sale of a narcotic drug – a Class-2 felony, and one count of possession of drug paraphernalia – a Class-6 felony, and was sentenced to a stipulated term of 15 years in prison. Upon his release, Ray will be placed on intensive probation.

Ray was one of three men arrested after an extensive undercover Arizona Department of Public Safety operation that purchased hundreds of fentanyl pills. Co-conspirator, Dylan Dewane Waters, 21, of Duncan, was previously sentenced to five years in prison; and co-conspirator Aaron Sean Maddock, 25, was sentenced to a stipulated term of 10 years in prison.

On Feb. 18, Ray was interviewed and allegedly admitted to his role in the ring and said he had been dealing heroin since he was laid off in April 2020. Ray said he began with heroin but started getting more fentanyl pills due to their popularity. He advised he normally bought two ounces of heroin and 700 fentanyl pills every three or four days from a Mexican National in Phoenix. He advised that he buys the pills for $3 each and sells them for $10 per pill or $6 per pill wholesale.

Waters previously pleaded guilty on April 20 to transportation of a narcotic drug for sale – a Class-2 felony, and possession of drug paraphernalia – a Class-6 felony. According to his plea agreement, Waters faced a maximum of five years in prison but probation was also available with the decision being up to the judge.

Maddock, 25, pleaded guilty on May 25 to three counts of sale of a narcotic drug – Class-2 felonies, and one count of transportation of a narcotic drug for sale – a Class-2 felony. Graham County Superior Court Judge Pro Tem Travis W. Ragland then sentenced Maddock to a stipulated term of 10 years in prison to be followed up with five years on standard probation upon his release from incarceration.

While Waters and Maddock had clean records prior to their arrests, Ray had a felony – trafficking in stolen property in the first degree – a Class-2 felony, that helped his sentence be slightly aggravated instead of the presumptive sentence for the crime he plead to.

The undercover operation included multiple purchases of hundreds of blue, 30-mg fentanyl pills by an undercover detective and the seizure of 1,000 fentanyl pills and roughly two ounces of heroin after a car driven by two of the suspects was pulled over for speeding upon returning from Phoenix with the drugs.

Ray also allegedly advised selling wholesale to Maddock and other dealers in the area. He said Maddock began by just buying pills from him but that they had since formed a type of business partnership. Ray also allegedly admitted to using fentanyl as well and said he takes two to three hits off a pill each day.