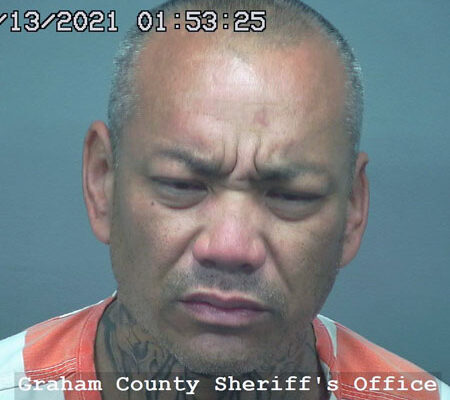 Contributed Photo/Courtesy GCSO: Edward Meno, 45, was sentenced to 9.5 years in prison to be followed by seven years on probation for possession of a narcotic drug for sale.

SAFFORD – A fentanyl dealer who was apprehended with 731 pills of the drug will spend nearly the next decade behind bars.

Edward James Cruz Meno, 45, of Safford, pleaded guilty to two separate counts of possession of a narcotic drug for sale and was given a prison sentence of 9.5 years. The incarceration will be followed by a probation tail of seven years.

“I believe that this agreement is in the interest of justice,” Kartchner told the Gila Herald. “It is important to remember the defendant’s consequences do not end when his prison sentence does. He then has to spend seven years on probation. If he violates the terms and conditions of his probation, he then has the potential of serving another prison sentence as long as 12.5 years. I hope that this agreement acts to serve as a deterrent to prevent other individuals from selling fentanyl in this county.”

Meno was apprehended on May 12 after being seen riding a bicycle with a woman down Main Street. A Safford detective and an Arizona Department of Public Safety detective were working as a two-man unit when they saw Meno and recognized him as being involved in a previous drug-related incident that occurred at the Safford Inn during March.

After positively identifying the male as Meno, the officers learned that he had an active warrant out of Pima County regarding failure to appear in court regarding a stolen vehicle, according to the report.

The officers then located the bicyclists in line at Dairy Queen. However, when the DPS detective approached Meno, the suspect leaped from his bike and attempted to flee on foot. At that time, the DPS detective tackled Meno to the ground and warned him he would be struck with a TASER if he continued to resist.

The officers then informed Meno of his warrant and placed him under arrest. A subsequent search of his person yielded $1,300 in cash. The Safford detective then searched a bag attached to the bicycle Meno was riding and found 11 baggies holding nearly 700 fentanyl pills (73.1 grams), a plastic container with another 33 fentanyl pills (3.5 grams), a couple of baggies with .5 of a gram, and .2 of a gram of methamphetamine, and various pieces of drug paraphernalia. Fentanyl is a powerful opioid that can be 50 times as potent as heroin.

During interrogation, Meno allegedly advised he uses meth and marijuana but not fentanyl or heroin. After initially saying he stole the bicycle earlier that day, Meno allegedly said he was transporting the drugs to make some money and was going to make $700 for delivering the contents of the bag.

The woman Meno was with declined the officers’ search request and was released at the scene.