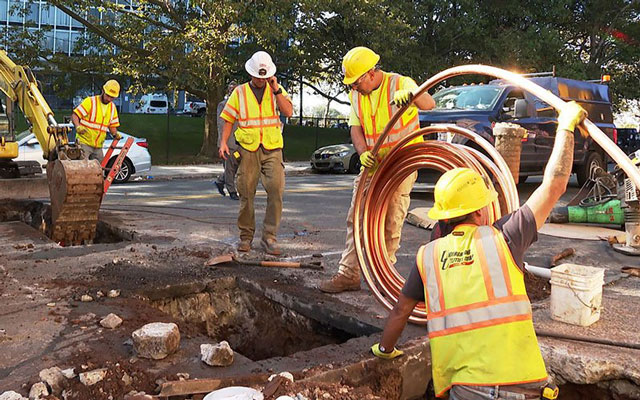 Photo By Ted Shaffrey/AP/Shutterstock: Workers replace old lead pipes with copper at a Newark, New Jersey, apartment building in 2021. Some critics say Arizona is getting more for lead pipe replacement under the federal infrastructure bill than other states with more need, but Arizona officials say they need all they’re getting and then some.

WASHINGTON – Arizona will get $109.5 million from the federal infrastructure bill this year to improve water systems in the state – a fraction of the $1.4 billion list of needs state officials say they have.

But even at that level, some critics say Arizona is getting more than its fair share of its portion of the funds – for lead-pipe replacement – over other states with thousands more pipes to replace.

The $1.2 trillion bipartisan Infrastructure Investment and Jobs Act, approved last fall, includes $50.9 million for lead-pipe replacement in Arizona, as well as $13.6 million to address PFAS contamination in the state and $32.3 million for other projects. That’s on top of a $12 million base grant to the state from the Environmental Protection Agency.

State officials welcomed the money, which they said is badly needed: They point to the Water Infrastructure Finance Authority (WIFA) of Arizona, which has received 34 applications from local governments around the state requesting more than $1.4 billion in water projects in the current fiscal year.

Those projects represent “an order of magnitude higher than the currently available IIJA funding … and the needs are growing,” Caroline Oppleman, an Arizona Department of Environmental Quality spokesperson, said in an email.

Of the 34 projects requested, 27 are for general water infrastructure projects, such as building new water pump stations in Prescott, new wells in Bullhead City, connecting water systems in Twin Peaks, and more. The estimated cost of the 27 proposals is $1.3 billion – for which the state expects to receive $44.9 million under the infrastructure bill.

The remaining seven requests include three proposals to clean up perfluoroalkyl and polyfluoroalkyl substance contamination – PFAS, so-called “forever chemicals” that the EPA last month proposed designating as hazardous substances. The chemical has been detected in wells around Luke and Davis-Monthan Air Force bases.

The bulk of the state’s money is targeted for the remaining four projects, to inventory lead service lines in drinking water systems for possible replacement later in Phoenix, Scottsdale, Tucson, and Payson. Those will cost an estimated $31.9 million total, far less than the $50.9 million the state is set to receive.

But that’s just the first year. Lindsey Jones, a senior program administrator at WIFA, said in an email that the agency expects to use the entire $50.9 million in federal funding for lead-pipe projects as more communities submit proposals for the remainder of this fiscal year.

Arizona is 10th-lowest among states for the number of pipes, according to a report by the Natural Resources Defense Council. But the NRDC notes that Illinois is scheduled to get $106.6 million for lead service line projects, a little more twice the allotment to Arizona, despite having 50 times as many problem pipes.

NRDC senior policy advocate Cyndi Roper said that means Illinois is getting $151 per service line, while Arizona gets $4,238.

She blamed the disparity on the use of a 2015 survey by the EPA that determined what each state needed to improve its water infrastructure. The survey is supposed to be updated every four years, but that update was delayed in 2019 and again in 2020 by the pandemic.

Roper said the next round of distribution could be made more equitable if the EPA were to update the survey to better reflect the needs of each state.

“We want them to move as quickly as possible because we don’t want to have any chance that they might miss the deadline for getting the formula right for the next allocation,” Roper said. That next round of funding would be for fiscal 2024, starting next July.

The EPA did not respond to requests for comment on the NRDC report on the funding formula.

Oppleman said ADEQ agrees that using the EPA survey to “distribute funds to the states in the defined categories misses the mark.” She suggested that funding be made more flexible for states to use as they need rather than directly linking it to specific projects, like lead-pipe replacement.

She highlighted the fact that the $13.6 million designated for PFAS cleanup projects is nowhere near the $80.5 million requested. Oppleman said PFAS is “a far larger-scale concern in terms of a resource need for Arizona.”