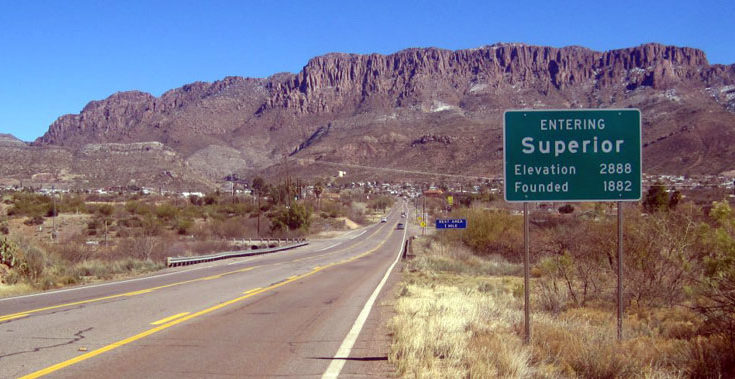 Motorists should expect six weeks of daytime delays between Superior and Top-of-the-World due to a paving project.

SUPERIOR – Motorists who use U.S. Highway 60 between Superior and Top-of-the-World should expect about six weeks of daytime delays for paving work scheduled to begin Monday, June 29, according to the Arizona Department of Transportation.

Delays of more than 15 minutes are anticipated because of the highway’s terrain, limited sight distances, and relatively high traffic volumes. Pilot vehicles and flaggers will guide drivers through the work zone, which will be narrowed to one lane of alternating traffic. The work will occur roughly between mileposts 227 to 236.

Work will occur between sunrise and sunset Mondays through Thursdays, with restrictions ending early Friday afternoons because of heavier traffic volumes.

Paving will begin near Superior and move east toward Top-of-the-World. While paving is underway near the U.S. 60/State Route 177 interchange on Monday, June 29, through Wednesday, July 1, drivers should plan for ramp closures and be prepared to follow signed detours.

The paving is the final part of an improvement project that began in late 2019 and includes concrete sidewalk/curb improvements at the U.S. 60/SR 177 interchange, shoulder improvements, guardrail replacement, bridge deck rehabilitation at Devils Canyon and signage upgrades.

Schedules are subject to change based on weather and other unforeseen factors. For more information, please visit azdot.gov/US60Superior.