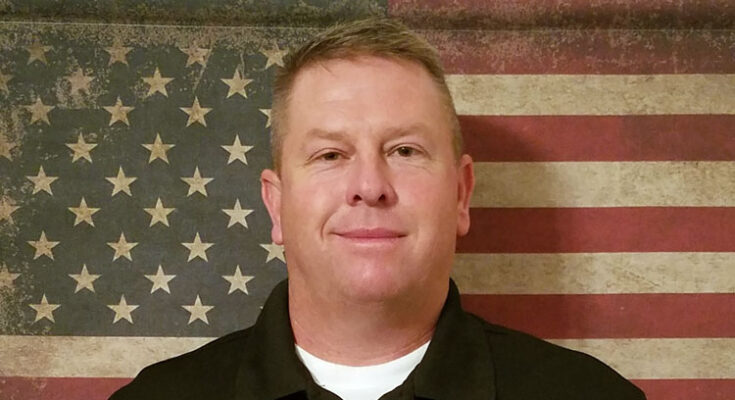 Hi, my name is Eric Ellison and I’m running for Greenlee County Sheriff.

I have been married to my wife, Veronica, for 25 years. We have two boys, Eli, and Seth. My current hobbies are hunting and working on older vehicles. I have been a Boy Scout leader for many years. I have taught about drugs for the Gila County Drug Coalition for the past seven years. I have been involved with many schools and taught many drug seminars regarding drug awareness through the state.

I worked with the Department of Corrections from 1996 to 2002, when I started an exciting career with the Arizona Highway Patrol. In 2016, Sheriff Sumner asked me to be his Chief Deputy for the Greenlee County Sheriff’s Office. I ran the Sheriff’s Office until July of 2018 when I retired. I then started new employment with the Greenlee County Attorney’s Office as their Investigator. August 26, 2020, made 24 for years in law enforcement experience. After the first eight months of working the Highway Patrol assigned to Globe squad, I discovered I had a real talent for apprehending drugs. My captain at the time decided to send me to drug recognition school, where I was certified as an expert. A year later, I went to instructor school and began teaching officers about drug apprehension. I continued working as a trooper and transferred to Morenci, where I lived until 2009 and moved to Pima. I continued with the drug training and was made the southern bureau drug coordinator. I attended more schooling making me an expert witness which allowed me to testify throughout the U.S. and many other countries around the world.  I worked and was still assigned to patrol both Greenlee County and Graham County until 2016. I have trained and worked in many manslaughter and homicide cases. The most recent homicide case was in Clifton in the Horseshoe curve.

Things I plan to accomplish for the citizens of Greenlee County

Greenlee County currently has one investigator for the entire 10,000 people who reside in Greenlee County. This man takes on all major crimes, which is an in-depth investigation. Crimes such as rape, child molestation, child pornography, homicide, suspicious death, financial crimes, drug, and sting operations. and many more crimes that would require an in-depth investigation. The problem is with the amount of crime that comes across the investigator’s desk, he cannot keep up and finish all the cases. And justice has to wait.  I plan on re-appropriating two deputy positions which cost nothing to the county and fully train them in investigations. This will give us three fully trained investigators, so justice does not have to wait. This will allow for cases to get completed in a timely manner and justice for our citizens.

Greenlee County currently does not have a school resource officer. The current practice of the sheriff’s office is random security checks in and out of a school. A school resource officer can be in the school most of the day talking and teaching children. If something were to happen and law enforcement was needed, they are there with no timely delay. They can also be that confidant for those kids who don’t have a mom or dad at home. They can teach classes such as stranger danger, suicide prevention, drug awareness, bullying, etc. In 2017, the current Sheriff was approached with a 75/ 25 funded school resource position, however, he turned it down. I plan on trying to get the same grant to get a school resource office back into the schools.

Remember the good old days when everyone knew who their deputies were and knew their name. We have in law enforcement gotten away from knowing our community and our community knowing us. I plan on assigning deputies’ certain areas of their patrol. They will hand business cards out to their areas of patrol and their cards will have their name and Sheriff’s Office phone cell number on it. This will allow deputies and the public to bridge the gap and be able to start communicating with our citizens. Deputies will attend ball games and school functions, public events, and get to know and help our community, They will be doing health and welfare checks on the elderly and looking out for their well being and if anything making them smile.

We all know we have a drug problem and have had one for quite a long time. We have several ways of attacking crime, one is placing deputies in high crime areas instead of having them sit on the side of the highway for hours. If we know we have drug houses lets put our deputy right in front of the house. If there is a deputy there constantly, they won’t be able to use drugs sell drugs and if they want to live this lifestyle they will eventually get caught or they will have to leave our community.

We must work well with the other law enforcement areas around us and not isolate ourselves. What happens in our surrounding areas, like Lordsburg, New Mexico, Hidalgo County, New Mexico, Safford, and Graham County all bleeds into our county, and if we don’t share our intel with each other we will not be effective in combating drugs in our area.

We have resources such as the Arizona Department of Public Safety, which can conduct sting operations and be able to infiltrate some of these long-lasting drug dealers we have had. We only have to ask for their assistance.

I remember when I was a child and my parents wanting to go on vacation. They could simply call the Sheriff’s Office and have them check the doors and windows on their house to give them a secure feeling while they were on their vacation. I want to give back to our community in ways that we have forgotten. Get back to using common sense.

Inmates in jail currently have no structure or rehabilitation services provided to them. I plan on bringing the inmate work crew back and again use our resources to help the elderly by supervised trusties cleaning yards, cemeteries, river trash, etc. Not only does this help our community, but it is a deterrent that makes jail no longer fun.

I will protect your Constitutional rights:

I will protect all your constitutional rights. I took an oath to protect and uphold the laws of the land and to protect and serve all citizens of Arizona. I will not bend the law to suit my needs or the needs of any. I will lead our deputies with integrity and be a good example to them and our communities.